Turkey Bans the Teaching of Evolution in Public Schools

Update Required To play the media you will need to either update your browser to a recent version or update your Flash plugin.
By John Russell
04 July, 2017


Turkey has historically prided itself on being a secular state.

Amendments to the constitution during the 1920s and 1930s separated religion and government policy.

Since that time, debates about the role of religion in public life have continued in the Muslim-majority country.

In a recent decision, the government banned the teaching of evolution in high school.

This action means that Turkish students entering high school will no longer learn about the theory of evolution. The theory comes from the work of Charles Darwin, the famed British naturalist.

His ideas are considered to be the basis for the scientific study of life on Earth.

The government said its decision was not about teaching Islam. Instead, officials said high school students "don't have the necessary scientific background and information-based context" to understand the theory of evolution.

Alpaslan Durmus is the head of the education ministry's curriculum board. Durmus said members of the board thought the theory should be taught to higher-level students.

"We tried to leave out some of the controversial issues from our students' agenda," Durmus added. 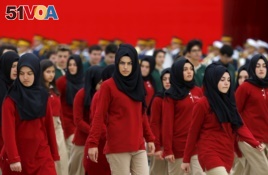 Critics of the decision

Critics of the decision say that Turkish children will not get the education they need.

Scholar Alaattin Dincer told VOA "The Turkish education system is very weak concerning the fundamental sciences. Both in domestic and international exams; be it math, physics, chemistry and biology, our students have very low passing grade percentages. It is actually terribly low."

Dincer added that the next generation of Turkish students should learn about evolution and Darwin. "If you raise them [students] without learning those subjects, how can you argue that we are a scientifically enlightened country that can produce the scientists of the future?" Dincer asked.

This week, Turkey's main teachers' union, Egitim Sen, said it was taking the issue to court.

Mehmet Balik is the chairperson of Egitim Sen. He criticized the decision to ban the teaching of evolution and a new policy that requires schools to have a prayer room. These actions "destroy the principle of secularism and the scientific principles of education," he said.

Other critics say the government's ban on teaching evolution is part of a plan by President Erdogan to push an Islamic identity onto Turkish society.

International perspectives on the teaching of evolution

Similar debates about the teaching of evolution have taken place in other countries, including the United States.

In the late 1990s, the state of Kansas famously banned the teaching of evolution in public schools. The School Board reversed its decision in early 2001 amid public criticism.

In the mid-2000s, at least 16 U.S. states were considering changes to the teaching of evolution in schools.

Although critics say religion and science are at odds, some Islamic theologians say evolution and Islam can exist together quite easily.

Ihsan Eliacik is a Muslim theologian. He told VOA, "If evolution is scientific truth that exists in nature, nobody can stand against it...Besides, by my religious faith, scientific truth means religious truth. The two are not contradictory."

naturalist – n. a person who studies plants and animals as they live in nature

curriculum -- n. the courses that are taught by a school, college, etc.

controversial – adj. relating to or causing much discussion, disagreement, or argument: likely to produce controversy

theologian -- n. a person who is an expert on theology