Update Required To play the media you will need to either update your browser to a recent version or update your Flash plugin.
By Ashley Thompson
05 December 2020


Turkey and Brazil are among the countries hard hit with coronavirus infections. Both are moving forward with plans to use an unproven COVID-19 vaccine developed by China's Sinovac Biotech.

The vaccine, called CoronaVac, is currently carrying out its Phase 3 trials.

Turkish Health Minister Fahrettin Koca announced a vaccine plan that includes the CoronaVac. The country has an agreement with Sinovac for 50 million shots. The first shipment of the vaccines will arrive in Turkey after December 11.

Koca said early use approval would be given to the vaccine after Turkish laboratories confirm its safety and after early results from Phase 3 trials are examined.

"If developments continue positively as we expect, Turkey would be among the first countries in the world to begin vaccinations in the early phase," Koca said.

The Butantan Institute biomedical center in Brazil's Sao Paulo state received 1 million shots of the CoronaVac. It was the second shipment of the vaccine. The first shipment of 120,000 shots arrived from China on November 19.

The vaccine still needs approval from Brazil's federal health agency Anvisa before it can be used. Butantan said it expected Sinovac to publish results for the treatment by December 15.

Sao Paulo Governor Joao Doria said his state expects to receive 6 million shots of the vaccine by the end of December and another 40 million by the middle of January. 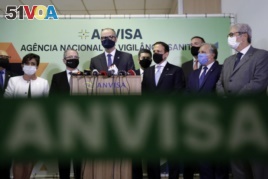 The CoronaVac vaccine treatment requires two shots. It is a so-called "inactivated vaccine." Such vaccines are made by growing the whole virus in a laboratory and then killing it. Safely growing and then killing the virus can take longer than newer technologies used to develop vaccines. But inactivated vaccines help the body prepare for the virus itself rather than just the single spike protein that lets the virus enter the body.

Last month, The Lancet medical papers published a study about the effectiveness of Sinovac's vaccine candidate based on early Phase 1 and Phase 2 trials. The study said the efficacy was found to be moderate. It also said the vaccine produced lower levels of antibodies than the levels of antibodies that have been found in recovered COVID-19 patients.

"The protective efficacy of CoronaVac remains to be determined," the study said.

Vaccine candidates from Pfizer-BioNTech and Moderna are reported to have nearly 95 percent efficacy rates. Britain's AstraZeneca says its vaccine has an efficacy rate of 70 to 90 percent, based on limited human trials.

Both Turkey and Brazil are experiencing huge rises in infections, hospitalizations and deaths. The daily number of infections in Turkey hit a record high of 31,923 on December 2. Those numbers put Turkey among the worst-hit places in the world.

Brazil is behind only the United States and India in total case numbers, with over 6.4 million recorded infections and 175,000 deaths. Sao Paulo is the hardest-hit state in the country.

Ashley Thompson adapted this story based on reports by The Associated Press and Reuters news agency. Hai Do was the editor.

phase - n. a part or step in a process

positively - adv. in a way that shows that you are hopeful and thinking about the good qualities of a situation

spike - n. a long, thin rod that ends in a point

efficacy - n. the power to produce a desired result or effect

determined - v. to learn or find out (something) by getting information