Turkey Claims It Has Killed 200 IS Fighters

Update Required To play the media you will need to either update your browser to a recent version or update your Flash plugin.
By Christopher Jones-Cruise
14 January, 2016

The retaliation responds to a suicide bomb attack that killed 10 German travelers in Istanbul this week.

Fifteen people were hurt in the bombing, including Germans. The New York Times newspaper reports citizens of Norway, Peru and South Korea were also wounded. 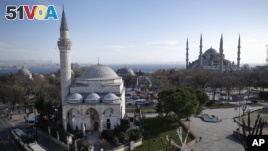 A view of the Sultan Ahmed Mosque, right, better known as the Blue Mosque in the historic Sultanahmet district of Istanbul, the area of an explosion, Tuesday, Jan. 12, 2016. The explosion killed several people and wounded more than a dozen others Tuesday morning in a historic district of Istanbul popular with tourists. Turkish President Recep Tayyip Erdogan said a Syria-linked suicide bomber is believed to be behind the attack.(AP Photo/Emrah Gurel)

Davutoglu said Turkish forces attacked numerous Islamic State terrorist group targets along its border with Syria and near a Turkish camp in northern Iraq. They used artillery and tanks in the attacks, which were carried out within the past two days.

He said if necessary, Turkey would also launch air attacks against the group. And he said Turkish forces will pressure the Islamist fighters until they leave the border areas. However, Turkey's war planes have not flown in Syrian air space since late November, when a Turkish pilot shot down a Russian fighter jet.

Separately, Turkish Interior Minister Efkan Ala said seven people have been arrested for taking part in the planning of the attack.

He said three of them are Russian citizens.

The attack happened in Sultanahmet Square, a popular tourist area.

Turkish officials say the attack was carried out by a 28-year-old Syrian member of the Islamic State terrorist group. They said Nabil Fadli had recently entered Turkey from Syria as a refugee, but he was not on any Turkish lists of suspected terrorists.

The interior minister said 36,000 people from 124 countries are banned from entering Turkey.

Over the past few days, Turkish forces have detained more than 70 people suspected of being members of the Islamic State terrorist group. It is not known if any of them are linked to the suicide bombing in Istanbul.

retaliate – v. to do something bad to someone who has hurt you or treated you badly; to get revenge against someone