Update Required To play the media you will need to either update your browser to a recent version or update your Flash plugin.
By Christopher Cruise
07 November, 2014


Turkish lawmakers are expected to approve legislation soon that would affect property rights. The measure would permit police to seize property from people accused of plotting against the government. Investors in Turkey and around the world are worried about the proposed law.

The homeland security reform bill will give police new powers to search and arrest people. It would also limit the rights of people accused of a crime. It would reduce the information police must provide suspects and their lawyers about the legal process being used against them. And it would let the government seize the property from people found guilty of threatening Turkey's constitution or trying to overthrow the government.

"The burden of proof has almost shifted from the prosecutor to the defendant, simply because it takes just reasonable suspicion for the court to confiscate assets, for maybe years."

Bulent Arinc is the Deputy Prime Minister of Turkey. He says the legislation is designed to give police more power in their fight to defend the country.

Emma Sinclair Webb is a top researcher on Turkey for Human Rights Watch. She says she is worried about the possibility the government will abuse the power the legislation gives it by making charges that cannot be proven -- just so it can seize property. 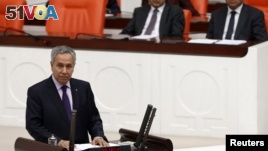 "Now, of course, coup plotting is a very serious charge but in Turkey it's a rather widely-used charge. We have seen it used against a group of football supporters for participating in protests. So I think increasing the power to seize assets is part of the government wanting to arm itself to crack down more on opponents."

In 2009, a newspaper belonging to Turkey's largest media company reported on possible government corruption. The government soon required the company to pay billions of dollars in tax fines.

And, this year, investigators repeatedly targeted a bank after President Recep Tayyip Erdogan accused its owners of acting against the ruling AK Party. The bank's owners said the accusation was not true.

Some government officials say they also are worried about the legislation. Volkan Bozkir is Turkey's minister for European Union membership. He has warned that the measure could hurt the country's efforts to join the EU. He said he will work to make sure any new laws meet EU requirements.

The country's attempt to join the EU has been temporarily stopped. Experts say EU officials do not want the process to begin again because they believe Turkey is moving farther away from democracy.

Atilla Yesilada says even before the new legislation was written, investors were worried about the lack of progress on democratic reforms and the threat of the Islamic State on Turkey's border.

"There are a lot of unconnected stories that are hitting the news wires which are sort of touching the nerve endings of investors. They haven't reached a point where there is a coherent negative Turkish narrative, as it's coalesced in Putin's Russia years ago or has happened in Venezuela. But I think there is concern. They are watching. And if there are any applications of these laws to companies, I am afraid the investor sentiment may change very rapidly."

Some members of Turkey's government do not support the legislation. But parliament is expected to approve the measure, and President Erdogan to sign it into law, this month.

Observers note that government supporters won elections last month to the Supreme Board of Judges and Prosecutors. It controls the country's legal system. As a result, observers say, there will be few limits on how the government uses the powers the new law gives it.

Correspondent Dorian Jones reported this story from Istanbul. Christopher Cruise wrote it for Learning English. Caty Weaver was the editor.

seize – v. to use legal or official power to take (something)

overthrow – v. to remove (someone or something) from power especially by force

coup (d'etat) – n. a sudden attempt by a small group of people to take over the government, usually through violence