Update Required To play the media you will need to either update your browser to a recent version or update your Flash plugin.
By Jim Dresbach
30 April, 2016


Journalists attempting to work in Turkey are facing new pressures as the government enforces a ban on insulting the president.

American reporter David Lepeska was denied entry to Turkey on Monday. He told followers on social media that he was stopped at Istanbul Ataturk Airport and immediately put on a flight to Chicago.

Last Sunday, Turkish police detained Dutch journalist Ebru Umar at her home in the town of Kusadasi. Her detention resulted from a series of tweets on social media. In those messages, she repeated parts of her recent story about Turkey's president, Recep Tayyip Erdogan. She was later released, but told not to leave the country. 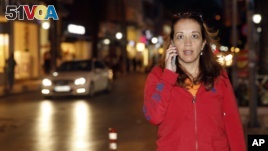 Dutch-Turkish journalist Ebru Umar talks on her mobile phone in Kusadasi, Turkey, Monday, April 25, 2016. Umar, a columnist for The Netherlands' Metro newspaper, has been barred from leaving Turkey.

Erdogan has enforced the rarely-used law that makes it illegal to insult the president. Since his election in 2014, the government has brought charges against nearly 2,000 people. Many are reporters or work for media companies.

Sevgi Akarcesme is a Turkish journalist. To avoid legal action, she said, most people simply say or write ‘the Palace' -- meaning the offices of the president.

She said she has been in court not only for her tweets, but for a comment left, without her knowledge, under one of the tweets. She received a suspended jail sentence.

Akarcesme was the editor of the English language newspaper Today's Zaman. The courts seized the paper last month on suspicion of supporting terrorism.

Laws against terrorism have been used against two of the country's most famous journalists. Can Dundar and Erdem Gul are with the Turkish newspaper Cumhuriyet. They were charged with publishing a story critical of the Turkish state. The article accuses the Turkish government of secretly giving weapons to Syrian rebels.

The collapse of the ceasefire between Turkey and the Kurdistan Workers' Party (PKK) is seen as one reason for the government's campaign against journalists.

The government argues the country is facing an unprecedented threat from the PKK and the self-declared Islamic State militant group.

On Thursday, a Turkish court sentenced two journalists to two years in prison for inciting "public hatred." But the journalists were found not guilty of "insulting religious values."

The charges were announced after the two reproduced a cartoon of the Prophet Mohammad. The picture first appeared in the French weekly Charlie Hebdo.

Concern about media freedom continues to grow among Turkey's allies, including the United States. The State Department, the European Parliament and Council of Europe voiced their concern about legal pressure against the media in Turkey.

Dorian Jones wrote this story for VOANews. Jim Dresbach adapted his report for Learning English. George Grow was the editor.

cartoon – n. a simple image showing its subjects in a humorous way