Update Required To play the media you will need to either update your browser to a recent version or update your Flash plugin.
By Bruce Alpert
21 July, 2016


Turkish leaders are saying life will continue as normal for most people despite a state of emergency.

It allows him to expand a crackdown begun after last week's failed coup led by some members of Turkey's military. Already, thousands of people have been arrested. 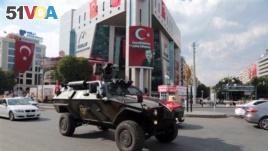 "Life of ordinary people and businesses will go un-impacted, uninterrupted, business will be as usual," he wrote on Twitter.

The Parliament on Thursday voted 356-115 to approve the three-month state of emergency.

Erdogan said he needs new powers to "rid the military of the virus of subversion."

The Associated Press reported Thursday that the government arrested nearly 10,000 people and closed hundreds of schools. It said 58,881 civil service workers were dismissed, forced to resign or had their licenses taken away.

And academic leaders and teachers were banned from leaving Turkey.

"The lynching has started," said Beyza Ustun, an official of the Kurdish-led, People's Democratic Party. Her opinion reflects the concern of Turkish minority groups of more threats to their rights.

U.S. Secretary of State John Kerry criticized the coup attempt. But he also said: "We need to have Turkey respect democracy, human rights, and fundamental freedoms."

President Barack Obama called Erdogan on Tuesday. He said the United States would assist Turkey's investigation of those responsible for the coup, according to the White House.

Turkey is very important to the United States battle against Islamic State militants. It uses a military base in Turkey to conduct air attacks against IS in Syria and Iraq.

Simsek, the deputy prime minister, said there could have been "carnage in the streets" if last week's coup succeeded.

He said the government is going after those who organized and carried out the coup.

"We owe it to our people to go after them," he said. "We will have a legal framework for it."

In a televised speech to the nation on Wednesday, Erdogan said the state of emergency would protect Turkey's democracy.

"This measure is in no way against democracy, the law and freedoms," he said.

Erdogan has been accused of taking too much power for himself -- even before the current state of emergency.

And some world leaders called on Erdogan to end the state of emergency as soon as possible.

German Foreign Minister Frank-Walter Steinmeier said it is important "the rule of law" is kept in Turkey.

He said Turkey should keep the state of emergency only for as long as necessary "and then immediately end it."

coup -- n. an attempt to takeover a government

ordinary -- adj. normal or usual, not unusual or special

uninterrupted -- v. not stopped or affected

lynching -- n. to kill someone illegally

carnage -- n. the killing of many people

framework -- n. the basic structure of something