Update Required To play the media you will need to either update your browser to a recent version or update your Flash plugin.
By VOA
19 December, 2015


Turkey says it is taking steps to strengthen its border with Syria.

But some experts are unsure if the country will take strong action against the Islamic State terrorist group.

Some of Turkey's Western allies do not know if the country is part of the problem or part of the solution in the fight against the militants. 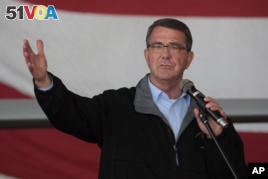 U.S. Defense Secretary Ash Carter was in Turkey this week. He urged its leaders to secure the border with Syria. Carter said that is the most important step Turkey can take in the fight against the Islamic State group.

Earlier this month, Turkey placed the border with Syria under emergency rule. Semih Idiz publishes his opinions about politics in a Turkish newspaper. He says the decision shows that international pressure on Turkey is working.

He says the policy change happened because "there is a lot of pressure from the West -- from (Turkey's) closest allies -- (that the) border must be sealed."

He writes that many people will ask why the border wasn't sealed sooner.

Late last month, Turkey shot down a Russian warplane along the Syria-Turkey border. Russian defense officials claim that Turkey is involved in illegal oil trade with the Islamic State group. They said top Turkish officials -- including President Recep Tayyip Erdogan and members of his family -- are involved in the trade.

But they have not offered evidence.

Erdogan rejected the accusations. But Russian President Vladimir Putin said oil controlled by the Islamic State and other terrorist groups enters Turkey. He said the Russian plane was shot down to protect "the security of these oil supply routes to Turkey."

The U.S. has also rejected the accusations.

American officials have called on Turkey to close a 98-kilometer section of its border with Syria. President Barack Obama says the Islamic State group transports foreign fighters and ships "fuel for sale that helps finance their terrorist activities."

Reports say Turkish forces are cooperating more with Western forces. Earlier this week, a Syrian man was detained after he was suspected of planning an attack on an American government target in Turkey.

But some experts are not convinced that Turkey is serious about fighting the Islamic State group. Atilla Yesilada works at Global Source Partners, a research group in Turkey.

He says "the flow of jihadis and supplies towards (the Islamic State group) has lessened because of stricter border controls." But he says nothing has been done to attack the group's large network. He says the country's ruling party -- the AKP -- must attack the group's supporters and recruiters in Turkey. He says those who gather money for the group must also be attacked. But he says he is "afraid AKP is unwilling to take that step, (because) it's going to involve" a large number of its conservative members.

Dorian Jones in Anakara reported on this story for VOANews.com. Christopher Jones-Cruise adapted the story for Learning English. Kathleen Struck was the editor.

seal - v. to prevent someone from going into or through (an area or place)

recruiter - n. a person who works to find suitable people and convince them to join a company, an organization, the armed forces, etc.