Turkey Expects Better Relationship With US under Trump

Update Required To play the media you will need to either update your browser to a recent version or update your Flash plugin.
By Dan Friedell
26 January, 2017


The Turkish government is preparing to reset its relationship with the United States under its new leadership.

Turkey's relationship with the U.S. was strained during Barack Obama's eight years in office. 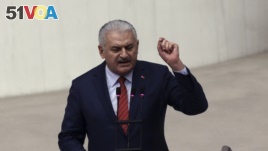 Semih Idiz writes about politics for the Turkish website Al-Monitor. He says people in Turkey think Trump will get the relationship between Turkish president Recep Tayyip Erdogan and the U.S. back on track.

"Trump is going to be more amenable towards the Erdogan government than many people assume. I think this is what Ankara is relying on. They have common enemies and I think they will try to concentrate on that..."

Turkish political experts say the relationship was hurt by the U.S. offer of military support to Kurdish opposition forces in Syria.

Turkish Prime Minister Binali Yildirim spoke recently about what the Trump government needs to do to reset the U.S. relationship with Turkey.

The prime minister also demanded that the U.S. end its support of the Syrian Kurdish group known as PYD. PYD is fighting against the Islamic State in the Syrian city of Raqqa. The Turkish government believes the PYD is also supporting Kurdish militant groups within Turkey.

Atilla Yesilada is an expert on Turkish politics and finance with the company GlobalSource Partners. He questioned the likelihood of Yildirim's conditions being met.

He said the U.S. Department of Justice is responsible for sending or not sending, Gulen back to Turkey. He said there is little Trump could do to make it happen faster.

He also said that said Rex Tillerson, Trump's nominee for Secretary of State, has defended the Kurds as allies in the fight against the Islamic State.

Politics observer Semih Idiz also said Turks should lower their expectations for a renewed relationship with the U.S. But he said there is still some reason for optimism.

He said many people thought Barack Obama's election would heal all of the problems in the Middle East, but it did not work out that way.

Idiz thinks people will be disappointed with the Trump administration, but that there will be some change.

"So I think that is what really a lot of people are looking for rather than any sort of panacea or magic wand that will fix everything overnight."

There are other issues that may continue to strain the U.S. relationship with Turkey. They include the possible move of the U.S. embassy in Israel from Tel Aviv to Jerusalem; Trump's support of Israeli settlements in the West Bank; and plans for U.S. use of the Turkish airbase in Incirlik.

Erdogan recently said "we keep hearing words [from Trump] about the Middle East that are actually disturbing."

And expert Atilla Yesilada called it "foolish" for Turkey to believe that Trump is "pro-Turkish" only because he is seen as "anti-Obama."

Dorian Jones wrote this story for VOANews. Dan Friedell adapted it for Learning English. Caty Weaver was the editor.

How do you think Turkey will fare during the Trump era? We want to know. Write to us in the Comments Section or on 51VOA.COM.

sensitive – adj. needing to be handled in a careful or secret way in order to protect someone or something

on track – adj. happening the way that you expect or want things to happen : following a schedule, routine, etc.

amenable – adj. willing to agree or to accept something that is wanted or asked for

rely – v. to trust or believe (someone or something)

concentrate – v. to cause (attention, efforts, strength, etc.) to be used or directed for a single purpose — usually + on