Turkey Wants to Be Known as ‘Türkiye’

Update Required To play the media you will need to either update your browser to a recent version or update your Flash plugin.
By Jonathan Evans
06 June 2022


The United Nations confirmed earlier this month that it had accepted a request from Turkey to change the country's official name.

Now, its name is "Türkiye."

Stéphane Dujarric is a spokesman for the U.N. secretary general. He said that the change was in effect "from the moment" they received the request letter. The information came from the Turkish news organization Anadolu Agency. 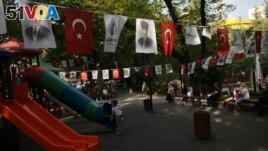 "Türkiye" is how the country's name is pronounced in Turkish. The move is seen as part of a push by Turkey to separate itself from the turkey bird and some undesirable meanings related with it.

In December, president Recep Tayyip Erdogan ordered the use of "Türkiye" to better represent Turkish culture and values. The order included a demand that "Made in Türkiye" be used instead of "Made in Turkey" on exported products. Turkish government agencies began using "Türkiye" in official documents.

Earlier this year, the government released a video as part of its efforts to change its name in English. The video shows visitors from around the world saying "Hello Türkiye" at famous places. Government officials said they began the campaign "to promote more effectively the use of ‘Türkiye' as the country's national and international name on international platforms."

Turkey's English-language state broadcaster TRT World has started using the name "Türkiye." But sometimes journalists will accidentally say the word "Turkey" as they get used to the change.

TRT World explained the decision in an article earlier this year. They said that searching for "Turkey" online brings up other results related to the turkey, a large bird native to North America. The network added that in the Cambridge Dictionary, "turkey" is defined as "something that fails badly" or "a stupid or silly person."

TRT World argued that Turks prefer their country to be called "Türkiye," in "keeping with the country's aims of determining how others should identify it."

Jonathan Evans adapted this story for Learning English based on a report from the Associated Press.

promote – v. to help something to grow or develop

platform – n. a means or opportunity to communicate ideas or information to a group of people