Update Required To play the media you will need to either update your browser to a recent version or update your Flash plugin.
By John Russell
07 July, 2017


Kemal Kilicdaroglu, leader of the opposition Republican People's Party (CHP) in Turkey, has often been criticized for being an ineffective leader.

Now, others are gathering around him in the 450-kilometer walk from the capital, Ankara, to Istanbul. The 68-year-old is leading a march against the rule of President Recep Tayyip Erdogan.

The so-called "Justice March" is a response to a crackdown that began after last July's failed coup attempt. The marchers say they are trying to reach across political divisions to bring attention to the thousands of people who have been jailed and lost jobs in the crackdown.

The marchers wear shirts and carry signs with the word "Adalet." It is the Turkish word for justice.

Zeynep Altiok is a CHP deputy leader. She claimed that many people have been arrested, including journalists and academics.

President Erdogan says the marchers are not loyal to Turkey. He suggested that they may work with terror groups.

"You are launching a march for terrorists and for their supporters," Erdogan said. "You have never thought about marching against terrorist groups, you can convince no one that your aim is justice."

Erdogan also suggested that the march could be a second coup attempt against him. 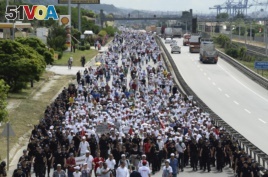 Kemal Kilicdaroglu, the leader of Turkey's main opposition Republican People's Party, walks with thousands of supporters on the 21st day of his 425-kilometer (265-mile) " March for justice " in Izmit, Turkey, July 5, 2017.

Political divisions along the march

Erdogan supporters played his campaign song and displayed support with a four-finger sign along the march.

Others lined up to applaud the opposition marchers as passing cars and trucks sounded their horns in support.

"They wave at us, they kiss us and wish us the best, they hug us with love, they get tears in their eyes. They say 'May God help you," a marcher said.

Kilicdaroglu worries about such divisions, but insists that the marchers are committed to peaceful resistance. "We have never been and we will never be in favor of violence," he said.

The march is scheduled to arrive in Istanbul on Sunday.

Dorian Jones wrote this story for VOA News. John Russell adapted his report for Learning English. Hai Do was the editor.

coup - n. the violent overthrow of an existing government

academic - n. an employee or member of a school, university or college

commit - v. to carry out; to put in place