Update Required To play the media you will need to either update your browser to a recent version or update your Flash plugin.
By Mario Ritter
23 October, 2017


Diplomats from the United States and Turkey are working to ease tensions after disputes led the countries to place visa restrictions on each other.

This past weekend, Turkish President Recep Tayyip Erdogan made sharply critical remarks about the U.S. over a diplomatic dispute from the summer.

Erdogan was angry that the U.S. had given arrest orders for Turkish security officials in August.

He said, "If the United States issues arrest warrants for my 13 bodyguards in a country where I went upon invitation, I am sorry, but I will not say that country is civilized."

The warrants were given for officials who were accused of attacking peaceful protesters outside the Turkish embassy in Washington in May. The violence took place during Erdogan's visit to the U.S.

Tensions increased earlier this month after Turkey arrested two men who were working for the U.S. diplomatic mission in Turkey.

As a result, the U.S. placed visa restrictions on Turkey. 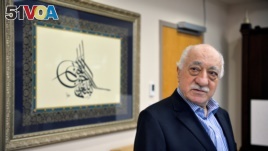 Turkey has accused U.S.-based cleric Fethullah Gulen of involvement in a plot to seize the government last year..

One of those facing charges in Turkey is Metin Topuz. He is accused of links to the U.S.-based cleric Fethullah Gulen. Turkey blames Gulen for last year's attempt by some members of the military to seize power.

Semih Idiz is with the Al Monitor website. He says Erdogan often gives strong criticisms of western countries at unexpected times. However, he said the Turkish leader wants to keep good ties with the West as well.

"But, we must realize Erdogan was in New York very recently and had a very chummy meeting with Donald Trump who called him a special friend. So Turkey is aware, for all the problems it has with America, too, that it has to tread cautiously."

Observers note that Erdogan's criticisms are linked to Turkey's domestic politics. They say Erdogan is seeking to gain support for the 2019 presidential and general elections. 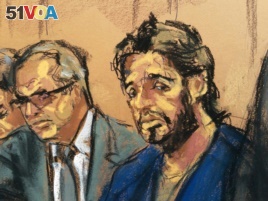 However, U.S. relations with Turkey could be hurt further by another court case involving a Turkish-Iranian businessman Reza Zarrab.

Zarrab is accused of being involved in secret trade with Iran, which was barred by U.S. law at the time. U.S. government lawyers say the businessman developed a plan involving billions of dollars that permitted Iran to avoid U.S. sanctions. They say a top Turkish state bank employee and a former minister are linked to the case.

Dorian Jones reported this story for VOA News. Mario Ritter adapted it for VOA Learning English. Hai Do was the editor.

issue –v. to send out, to give out in an official way

warrant –n. a court order that give police the power to do something

tread –v. to walk, to act in a certain way

sanctions –n. actions to cause a country to obey international law usually by restricting trade or financial exchanges