Update Required To play the media you will need to either update your browser to a recent version or update your Flash plugin.
By Gregory Stachel
13 January 2022


The president of Turkmenistan is calling for an end to one of the country's most notable sights: the burning crater widely known as the "Gates of Hell."

The desert crater is found about 260 kilometers north of the capital, Ashgabat. It sits near the village of Darvaza and its official name is Darvaza gas crater.

The fire has burned in the Central Asian nation since the early 1970s. It is a popular place to visit for the small number of travelers who come to Turkmenistan. The country is difficult to enter and highly controlled. 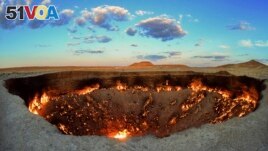 The crater fire named "Gates of Hell" is seen near Darvaza, Turkmenistan, Saturday, July 11, 2020. The president of Turkmenistan is calling for an end to one of the country's blazing desert natural gas crater. (AP Photo/Alexander Vershinin)

The Turkmen news site Turkmenportal said that a 1971 search for gas caused the ground to collapse, which formed the crater. At the time, Turkmenistan was under control of the former Soviet Union.

The crater is about 60 meters across and 20 meters deep. Earth scientists set a fire to prevent the spread of gas. They expected the gas to burn off in a few weeks.

But the fire is still burning 50 years later.

In 2019, state television showed President Gurbanguly Berdymukhammedov speeding around it in an off-road vehicle.

But earlier this month, the state newspaper Neitralny Turkemistan reported that Berdymukhammedov has ordered his government to look for ways to put out the fire. It is causing ecological damage and affecting the health of people living in the area.

Turkmenistan has the world's fifth-largest natural gas reserves. But life for most of the country's 6 million people remains difficult. Berdymukhammedov has ruled his country by demanding obedience. He has isolated Turkmenistan during an economic crisis that has made many of its citizens poor, and shortages of simple goods and food are common.

A 2021 Bloomberg report said that Turkmenistan's state-controlled energy industry is one of the world's worst creators of the greenhouse gas methane.

Methane is 80 times more powerful than carbon dioxide as a planet-warming greenhouse gas. This means that controlling leaks in gas production is important in fighting climate change.

In 2021, the International Energy Agency estimated Turkmenistan's total methane creation was behind only Russia, the United States, Iran and Iraq. These countries are all major oil and gas producers.

However, Turkmenistan had the second-highest methane creation intensity in the world. This number means how much methane is leaked into the environment in relation to natural gas that is produced. Turkmenistan's leak rate was more than five times larger than the world's top natural gas producer, the United States.

greenhouse gas – phr. n. air pollution that is related to or cause the warming of the Earth's atmosphere