Turtles in Demand as Pets, Leading to Increase in Poaching

Update Required To play the media you will need to either update your browser to a recent version or update your Flash plugin.
By Gregory Stachel
20 November 2022


A growing demand for turtles as pets in the United States, Asia, and Europe has led to a rise in poaching. Poaching means to catch or kill an animal illegally.

Wildlife trade experts believe the rise in poaching is adding to the worldwide drop in rare freshwater turtles and tortoises.

Such concerns have led to proposals to increase protection for freshwater turtles. 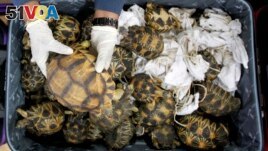 More than 180 nations have gathered this week in Panama as part of the Convention on International Trade in Endangered Species of Wild Fauna and Flora, or CITES. The CITES meeting runs from November 14 to 25.

Exact numbers on the turtle trade, especially illegal trade, can be hard to find.

Tara Easter, a doctoral student at the University of Michigan, studies the trade. She looked at turtle trade data from the U.S. Fish and Wildlife Service. She estimates that the business export trade for mud turtles in the United States increased from 1,844 in 1999 to nearly 40,000 in 2017. And she estimated that the trade in musk turtles increased from 8,254 in 1999 to more than 281,000 in 2016.

The Collaborative to Combat the Illegal Trade in Turtles is a group of mostly state, federal and tribal biologists working to combat poaching of North American turtles. Since 2018, the group has documented at least 30 major illegal trafficking cases in 15 states. Some involved fewer than 50 turtles. Other cases involved several thousand turtles.

Earlier this year, a federal judge in North Carolina sentenced a man to 18 months in prison and fined him $25,000 for trafficking turtles in violation of the Lacey Act. The law bans trafficking in fish, wildlife, or plants that are illegally taken, held, transported, or sold.

The man trafficked 722 eastern box turtles, 122 spotted turtles, and three wood turtles for markets in Asia. The man received more than $120,000 for the turtles, which have a value of $1.5 million in Asia.

Freshwater turtles are among the world's most trafficked animals. They are targeted by criminal networks that connect with buyers on the internet. They transport the reptiles to black markets in Hong Kong and other places in Asia. From there, they are sold as pets, to collectors, and for breeding, food, and traditional medicine. In many countries, there are no laws to govern the trade.

The business can be highly profitable. Some kinds of turtles are sought out for their colorful or unusual appearance. They can be sold for thousands of dollars in Asia.

The trade adds to the threats turtles already face, including climate change, environment destruction and other animals eating their eggs.

Experts say poachers are even more problematic because they target rare kinds of turtles and adult females.

"The loss of large numbers of adults, especially females, can send turtles into a spiraling decline from which they cannot recover," said Dave Collins. He is director of North American turtle conservation for the Turtle Survival Alliance.

The United States and several Latin American countries have proposed banning or limiting the trade in more than 20 turtle species. In their CITES proposal, the countries included data from Mexico that found nearly 20,000 were confiscated from 2010 to 2022. To confiscate means to take something away from someone to enforce laws or rules.

The illegal trade has also led governments to propose listing for the first time 42 turtle species under CITES – including North American musk turtles. A listing means traders will need permits to sell them internationally.

Matthew Strickler is with the U.S. Department of the Interior. He is heading the American group at the CITES meeting in Panama. He called the possible listings and increased protection for North American turtles "really, really important."

"We've seen this pattern of turtles being depleted in one place, and then poachers and traffickers and traders moving to another place," Strickler said. "Southeast Asia was depleted. They moved to Africa. Now, we see them moving to the Americas."

turtle – n. a reptile that lives mostly in water and that has a hard shell which covers its body

pet – n. an animal (such as a dog, cat, bird, or fish) that people keep mainly for pleasure

tortoise – n. a kind of turtle that lives on land

tribe – n. a group of people that includes many families and relatives who have the same language, customs, and beliefs

combat – v. to try to stop (something) from happening or getting worse

traffic – v. to buy or sell something especially illegally

sentence – v. to officially state the punishment given to (someone) by a court of law

spiral – v. to greatly increase, decrease, or get worse in a continuous and usually fast and uncontrolled way