Update Required To play the media you will need to either update your browser to a recent version or update your Flash plugin.
By Dan Friedell
05 January 2022


Fatima Madrigal of California recently gave birth to a boy and a girl.

However, the twins have different birth dates and even birth years. 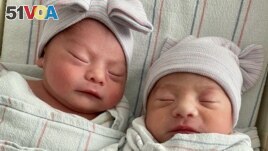 Fatima said her family, which includes her partner Robert Trujillo, and their three other children were happy to welcome the new babies.

The babies were supposed to come two weeks later, but their early arrival created a rare set of birth dates and years.

"It was a surprise," Fatima said. "I was kind of shocked because twins don't run in my family." Fatima went on to say her family is now complete.

When they are older, Fatima said she would tell the children the story of their birth and permit them to choose if they wanted to celebrate their birthdays separately or together.

"But right now that they're small and they're with me," she said, "they're going to celebrate their birthday together."

The medical center where the twins were born said there are about 120,000 twins born each year in the U.S. However, twins with different birthdays are rare, and the chance of twins being born in different years is about one in 2 million.

Dan Friedell adapted this story for Learning English based on a report by Reuters.

Have you heard any other interesting twin birth stories? Tell us in the Comments Section and visit 51VOA.COM.

twins – n. either one of two babies that are born at the same time to the same mother