Update Required To play the media you will need to either update your browser to a recent version or update your Flash plugin.
By Bryan Lynn
27 April 2022


Twitter has accepted Elon Musk's offer to buy the social media service in a deal worth about $44 billion. Musk – the American billionaire who heads Tesla and SpaceX – has said his goal is to shape Twitter into a more welcoming platform for free speech.

Twitter's board of directors voted this week to accept Musk's takeover offer. The deal could be finalized sometime this year. But it still has to be approved by Twitter shareholders, as well as regulatory agencies in the United States and other nations where Twitter does business.

How did the deal happen? 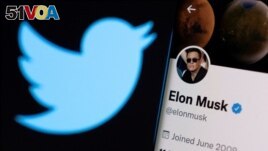 Shortly after receiving Musk's proposal, Twitter's board established an anti-takeover position known as a "poison pill." A poison pill is a financial tool used by companies to block unwelcome takeover attempts.

A poison pill is generally designed to limit the number of shares that can be bought by a single investor. Companies permit existing shareholders to buy additional stock at a reduced rate. This method can flood the market with so many newly issued shares that a company takeover becomes too costly.

However, poison pills can also be used to improve a company's negotiating position in a takeover deal. Or they can invite additional offers for more money. In Twitter's case, the poison pill seemed designed to prevent Musk from raising his existing share in the company above 15 percent without negotiating a deal with its board, Reuters news agency reported.

Musk answered that position by offering detailed information about his financing plans. These plans showed that he successfully raised $46.5 billion to finance his offer. The amount included $21 billion of Musk's personal wealth. Musk has been declared the world's richest person by Forbes magazine.

Industry experts say the financing plan showed how serious Musk was about his offer. And it may have opened the door to other large Twitter shareholders interested in hearing more about his plans for the company.

John Meyer is a technology expert and investor. He told The Associated Press he thinks there is "nothing better for Twitter than Elon Musk buying it..." Meyer said he expects Musk to replace Twitter's current board, invest in new products and find new ways to improve profits.

"Musk has the track record that he can do the impossible," Meyer said.

What approvals are needed?

Government regulators, both in the U.S. and the European Union, are likely to examine the proposed Twitter deal. The main issues to be considered are how the deal could affect competition in the industry and whether it violates antitrust laws.

Twitter shareholders also need to approve the deal. A company can choose to hold a vote at any time, even before regulators have completed their examinations. Twitter's yearly meeting is set for May 25, so it is possible the vote could happen then.

In the past, Musk has been critical of some of Twitter's policies related to free speech issues. Since seeking to take control of the company, he has promised to "improve and fix" Twitter and make it "better than ever." This includes his stated plans to take steps to ensure free speech for all individuals. But he has not provided many details on those plans.

Some industry experts fear Musk's desire to establish a free speech platform without limits could lead to more misinformation and hate speech appearing on Twitter. Current Twitter policies against such content can result in users being restricted or banned from the service.

Michael Nathanson is an analyst at stock research company MoffettNathanson. He told Reuters that possible attempts by Musk to ease content restrictions could turn advertisers away.

"We expect advertisers will be less willing to spend on Twitter if Elon Musk removes content moderation in order to promote free speech," Nathanson said. If that happens, he added, advertisers on Twitter may move to platforms like Google, YouTube, TikTok or others.

platform – n. something that permits someone to tell a large number of people about an idea, product, etc.

regulation – n. the act of controlling an activity or process, especially by using rules

antitrust – n. related to efforts to prevent companies from working together to control prices unfairly

analyst – adj. someone whose job is to study or examine something in detail

moderate – v. to make sure the rules of an internet discussion are not broken

promote – v. to urge people to like, buy or use something