Update Required To play the media you will need to either update your browser to a recent version or update your Flash plugin.
By Bryan Lynn
11 April 2022


Twitter says it will begin testing a new editing tool for tweets in the coming months. The tool would permit users to remove or add information to published tweets.

Some well-known Twitter users – including Kim Kardashian, Ice T and Katy Perry – have urged the company to permit the editing of tweets. American businessman Elon Musk is another famous user who has publicly called on Twitter to add an editing tool. Musk is head of the American companies Tesla and SpaceX.

Twitter's first message about the editing tool was published in a short tweet on April 1, April Fools Day. The tweet, from Twitter's official account, said simply: "we are working on an edit button." 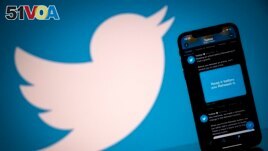 FILE - An illustration photo taken Oct. 26, 2020, shows the Twitter logo displayed on the screen of a smartphone and a tablet in Toulouse, France.

On April 5, Twitter's vice president of consumer products, Jay Sullivan, confirmed that the message was not an April Fools joke. He wrote that Twitter had been exploring how to build an edit tool since last year.

Twitter said the decision was not linked to the company's announcement that Musk had joined Twitter's board of directors. Musk's investments in the company currently total about 9.2 percent, making him Twitter's largest individual shareholder. His share is reportedly worth nearly $3 billion.

In the past, Musk had been critical of some of Twitter's policies related to free speech issues. He recently created a poll on Twitter that asked users if they believed the service was committed to permitting free speech for all individuals.

Musk also created a poll that asked users if they supported the idea of an editing tool for tweets. Twitter chief executive Parag Agrawal had urged users in a tweet to "vote carefully" in the poll, which drew about 4.4 million people. The poll showed that 74 percent of users want an "edit button" added to Twitter. About 26 percent opposed the idea.

Some people who study Twitter say that adding an edit button would likely change the nature of the service. It would become less valuable as a historical record that stores official statements by politicians and other well-known people.

Jennifer Grygiel is a communications professor at Syracuse University in New York. She is an expert on social media who researches propaganda. Grygiel told The Associated Press that Twitter, for better or worse, "has become the de facto news wire."

Grygiel warned that with an editing tool, users could change important or controversial tweets without leaving evidence of the original statement. Grygiel suggested giving Twitter users a period of time to edit their tweets before they are published.

Twitter officials say they will test the feature in its paid service, called Twitter Blue. Vice President Sullivan tweeted that the coming months of testing will be spent learning "what works, what doesn't, and what's possible."

He added that the company was experimenting with time limits and other controls aimed at offering complete openness in the process. Without such controls, Sullivan said, the editing tool "could be misused to alter the record of the public conversation."

poll – n. a public opinion study in which people are asked or their opinions about a subject or person

button – n. a small, sometimes circular object that appears on a computer screen that a user can click on to operate something

de facto – adj. existing in fact, although possibly not intended, legal or accepted

controversial – adj. causing a lot of disagreement or argument

original – adj. existing since the beginning