Two College Degrees for the Price of One

Update Required To play the media you will need to either update your browser to a recent version or update your Flash plugin.
By Bruce Alpert
05 June, 2017


Ten Americans recently received two college degrees: one from a university in New York and the other from a Chinese university.

The dual-degree program is a project of Hofstra University on Long Island and China's Dongbei University of Finance and Economics.

Herman Berliner is the head of Hofstra's Business School. He believes it is the first time American undergraduate students received degrees from an American and Chinese university at the same time.

Under the program, visiting Dongbei professors teach some of the business and finance classes at Hofstra.

Students also take part in a six-week summer internship with an international company in China and attend education programs organized by Dongbei. 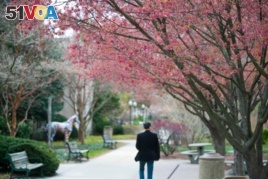 "Now a days a good business education should be global because it is a global economy," Berliner said. "And it should be hands on because hands on gives our students more exposure to the reality they will find in the business world."

Berliner said he expects to welcome Chinese students to Hofstra to continue their education and take internships at American companies.

Tori-Rae Matisoff of Monroe, New Jersey, is one of the 10 students to graduate with two degrees in business -- one from Hofstra and the other from Dongbei.

Last summer, she worked for the human resources office of Pfizer Inc. in China. Pfizer is one of the world's largest producers of medicine.

"This kind of experience really opens up your mind," the New Jersey woman said.

Matisoff, who knows Mandarin, said she met in China with Pfizer workers who wanted to improve their English skills. So, they would have bilingual discussions.

The Chinese workers asked her a lot of questions, like "what kind of President Donald Trump will be." They also wanted to know whether she and her family had guns because, as she put it, "no one carries guns in China."

The workers also asked about how she signed onto to Facebook. In China, the government blocks Facebook's website. The site is easily accessed in the United States.

She is continuing her business studies at Hofstra. She hopes to complete a master's degree program. 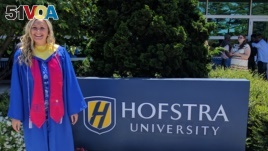 Stuart Rabinowitz is Hofstra's president. He told the students that learning about another culture and how to communicate when "you don't speak the language well" will help them as they leave Hofstra for jobs or graduate school.

"These are experiences and skills that will set you apart," he said.

While Hofstra appears to be the first undergraduate program to offer dual degrees with a Chinese university, many American colleges offer students a chance to study overseas for part of a school year.

And some colleges offer dual graduate school degrees with colleges outside the United States.

Northwestern University in Illinois, for example, offers a Master's of Science Degree in engineering with Shanghai Jiao Tong University in China.

At Hofstra's graduation ceremonies, the 10 dual-degree recipients were given a red stole from Dongbei University, as well as their Hofstra diploma.

Donbei University is in the northeastern Chinese city of Dalian. About 20,000 students are taking classes there. Hofstra has over 11,000 students.

Hofstra students in the dual-degree program take all their courses in English. Knowledge of Chinese in not required.

Two years ago, the Modern Language Association reported a drop in the percentage of students taking foreign language classes at American colleges and universities. The association said that nine out of every 100 students took such a class in 2009. But in 2013, the rate was eight per every 100 students.

While the number of people studying Spanish and French was down, there were increases in Chinese, Korean, Portuguese and American Sign Language, the group noted.

Recently, some Princeton University educators proposed that all students be required to take a foreign language class, even if they already speak a second language. It would help them better understand the world, the educators said.

dual degree - n. official documents from two colleges given someone who successfully completed a series of classes

internship - n. a job given to students so they can get training and experience in a profession

access - v. a way of being able to use or get something

diploma - n. document which shows that a person has finished a course of study or has graduated from a school

disadvantage - adj. something that makes someone less likely to succeed than others