Update Required To play the media you will need to either update your browser to a recent version or update your Flash plugin.
By VOA
24 July, 2016


Dinosaurs ruled the Earth for about 160 million years. Then they disappeared.

Scientists have argued for years about what killed off the dinosaurs.

Was it the huge volcanic eruption 66 million years ago in what is now India? That explosion changed the Earth's climate in a major way. Then, just 150,000 years later, a meteorite from space struck the coast of Mexico. This also caused changes to the climate.

Both catastrophic events happened during what is called the Cretaceous Period in Earth's history.

Scientists have long debated which event caused the dinosaurs to disappear? One reason the debate continued was the failure of the scientists to find a perfect window from which to look into the past.

Seymour Island—key to the past?

But now, researchers say they have found a clear record of what happened. 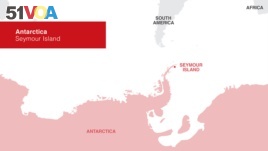 The new evidence comes from Seymour Island -- an Antarctic island near the southern most part of South America. The researchers reported their findings in Nature Communications.

Sierra Peterson is a paleoclimatologist with the University of Michigan. She studies the climate from ancient times. To do that, she uses evidence from rocks and the fossilized remains of ancient creatures.

"The timing of the volcano and the meteorite are quite close together."

Peterson says that with only 150,000 years separating them, physical evidence of the two events is so close together in the rock record that it is hard to tell them apart. But it is easier at the Antarctic island.

"At Seymour Island there's 40 meters separating those two events. So we can really separate the influences of each one, and that's why we can see the climatic impacts of both as two separate events."

"It makes sense why people thought it was one or the other. And really they were both right."

That is Andrea Dutton, a geochemist with the University of Florida. When Dutton was a student, she studied fossilized shells from Seymour Island. She examined them in an effort to understand ancient climate changes. But the results were unclear and difficult to understand.

The fossils were put in storage until Peterson showed up with a new technique. It identifies the kinds of carbon molecules in a shell. These molecules depend strongly on the temperature of the water when that layer of shell was formed. 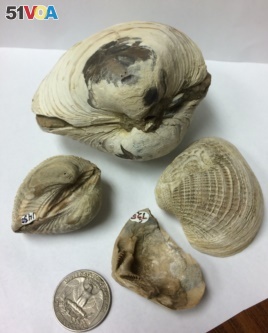 Four bivalve specimens from Antarctica's Seymour Island analyzed in the University of Michigan-led study, showing the range of sizes of the different mollusks.

What this meant is that, for the first time, scientists were able to find out the temperature record during the dinosaurs' last days. What they discovered was that things got hot -- not once, but twice.

"At the time when the volcanism began, we found a rapid warming spike that had not been seen before. And we also found at the boundary itself, when the meteorite hit, we also saw another warming spike."

It is what the researchers are calling a "one-two punch." First, the dinosaurs were hit by acid rain and volcanic dust after the huge volcanic eruption. Dutton says things got a lot worse with the sudden temperature increase that followed.

"Certainly these clams that we were studying and the other fauna in this system, they had experienced temperatures this warm earlier in the Cretaceous. But what happened here is the temperature increase was so fast that it was a large stress that they weren't able to adapt that quickly to the large temperature change."

Dutton says she and Peterson are not necessarily saying that the warming is what killed everything at the time. But it could have made things worse. It could have been responsible for part of the dinosaurs disappearing.

After that, the creatures that survived the first warming spike suffered another blow — a huge rock from space hitting Earth. That impact also caused a jump in temperatures.

What does this mean for us today?

So why is it important to know about how and why the dinosaurs died off so long ago?

Peterson and Dutton suggest people should pay close attention to their work. They say the effects of fast climate change in the Cretaceous period are similar to what scientists are seeing now from climate change.

Peterson says the volcano eruption before the meteorite increased pressure on Earth's environment. In that same way, the carbon dioxide gas emissions from human activities are affecting the environment today.

"We are already seeing extinctions and certain organisms being under a lot of environmental stress, reduced habitat, things like that. All of the same things we are observing today would have been in play in the Cretaceous as well. And so, you know, I guess fingers crossed for no meteorite impact."

And so it seems we might have a lot of learn from the dinosaurs' disappearance.

We want to hear from you. Write to us in the Comments Section below, and find us on 51voa.com.

catastrophic – adj. of the nature of a catastrophe, a disaster

molecule – n. the smallest possible amount of a particular substance that has all the characteristics of the substance

layer – n. one thickness of something laid over another

spike – n. a sudden, very fast increase in something

boundary – n. something that shows where an area ends and another begins

"one-two punch" – idiom phrase. getting hit, or punched, but one thing, and then another

clam - n. a type of shellfish that lives in sand or mud that has a shell in two parts (called bi-valves) and can be eaten cooked or raw

fauna - n. all the animals that live in a particular area, time or environment

impact – n. place where something hits another

extinction – n. when something has died out completely