Update Required To play the media you will need to either update your browser to a recent version or update your Flash plugin.
By VOA
15 December, 2014

Six people escaped the restaurant just before the police raided it. The dead include two men and one woman. Four other people were injured.

Australian officials identified the gunman as Man Haron Monis, an Iranian immigrant. He is believed to have taken control of the restaurant Monday morning, local time. Australian Prime Minister Tony Abbott said the incident may be politically motivated. 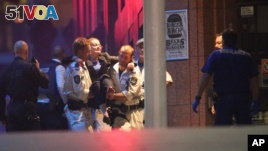 An injured hostage is carried to an ambulance after shots were fired during the siege in the central business district of Sydney, Australia. (AP Photo/Rob Griffith)

During the incident hostages in the cafe were seen standing with their hands pushed up against the windows. A black flag with Arabic letters could be seen through the glass.

Man Haron Monis was facing charges related to a a murder and a seprate sex crime. Media reports say he was found guilty in 2012 of sending offensive and threatening letters to the families of Australian soldiers killed overseas.

Hong Kong Chief Executive Leung Chun-ying says the protests taking place in the territory are over. However, activists say they will return. Police have cleared the last demonstration areas. The protests had continued for 10 weeks.

Mr. Leung spoke to reporters Monday. He called the protests, "illegal occupation activities" and said they had come to an end. He added that the demonstrations caused "serious" economic losses in the tourism and retail industries.

He made the comments as police removed the final protester camps from a road in Causeway Bay. Police arrested more than twelve people who refused to leave the area. There were no reports of violence.

A small group of protest leaders said, "We will be back." The group also called on Mr. Leung to step down.

Hong Kong pro-democracy activist Kenneth Chan was among those arrested at Causeway Bay Monday. He told VOA before his arrest that the activists should have nothing to fear.

Causeway Bay was the smallest of three main protest sites that formed in late September to demand that Beijing permit fully democratic elections in Hong Kong in 2017. China has said a committee must approve candidates before they can seek office.

US Secretary of State holds talks with Israeli Prime Minister

U.S. Secretary of State John Kerry is to hold talk with Israeli Prime Minister Benjamin Netanyahu in Rome, Italy. The meeting is the first stop on Mr. Kerry's trip to learn about the current situation of Israeli-Palestinian issues.

Palestinian officials are pushing for a U.N. resolution that would call for an end to Israeli occupation of Palestinian territory within two years. A Jordanian version of the resolution could be presented to the U.N. Security Council this week.

Mr. Kerry plans to travel next to Paris for talks with foreign ministers of France, Britain and Germany. On Tuesday, he is expected to hold talks with chief Palestinian negotiator Saeb Erekat and Arab League chief Nabil Elaraby in London.