Update Required To play the media you will need to either update your browser to a recent version or update your Flash plugin.
By Dan Friedell
07 July 2022


On July 4, strangers found a small boy covered in blood just after a shooting attack started in Highland Park in the Midwestern U.S. state of Illinois.

The boy was taken to a nearby home and kept safe until officials were able to find his grandparents.

The attack took place as crowds were gathered at an Independence Day Parade. Greg Ring ran from the place of the shooting with his wife and three children. That is when a stranger found him and handed him a small boy covered in blood. 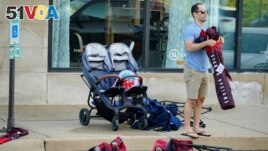 A community member collects his belongings the day after a mass shooting at a Fourth of July parade in the wealthy Chicago suburb of Highland Park, Illinois, U.S. July 5, 2022. (REUTERS/Cheney Orr)

Ring said the boy was saying "mommy" and "daddy" and pointing in the direction of the parade where six people were killed and many more were hurt. Later, a seventh person died of their wounds.

Ring took the boy inside, where the Rings cleaned off the blood and let him watch television. After the boy's photo was sent around on social media, people were able to find out his name: Aiden McCarthy. His parents, 37-year-old Kevin and 35-year-old Irina, were dead. Aiden had been found covered in his parents' blood.

A family member said Irina's parents would take care of the boy.

A friend, Irina Colon, started a fundraising website for Aiden. On it, she wrote: "Aiden...will have a long road ahead to heal...and navigate life as an orphan." So far, people have given more than $2 million.

One of the people who gave money wrote: "Aiden, my heart is breaking for you."

Ring said he is still trying to understand what happened on July 4. He said he does not want to be thought of as a hero and he did what anyone else would have done.

He feels as if he and his family are lucky to be alive.

"I have not slept for a minute the last two nights," he said, adding "it is nothing short of a miracle that the five of us — me, my wife and my three kids — one of us or all of us isn't dead. I do not understand. Everybody around us was hit or got shot."

In the three days since the shooting on America's Independence Day, the five other victims were identified. They are: Katherine Goldstein, Stephen Strauss, Jacquelyn Sundheim, Nicolas Toledo-Zaragoza and Eduardo Uvaldo. Officials said some of the injured remain in serious condition.

The top lawyer for Lake County, Illinois, is Eric Rinehart. Robert Crimo III has been identified as the suspected shooter. Reports said Rinehart plans to bring attempted murder charges against Crimo for each person who was hurt.

Dan Friedell adapted this story for Learning English based on reports by the Associated Press.

stranger– n. someone who you have not met before or do not know

navigate –v. to find the way to where you are trying to go; to deal with things or figure them out

miracle –n. an unusual or wonderful event that is believed to be caused by the power of God