Update Required To play the media you will need to either update your browser to a recent version or update your Flash plugin.
By VOA
17 July, 2014

The powerful ocean storm Typhoon Rammasun is heading toward China after killing 38 people in the northern Philippines.

Philippine officials say eight people are also missing after the storm moved across the main island of Luzon on Wednesday.

Hundreds of thousands are still without electricity in the capital city, Manila, and surrounding areas.

Philippine officials moved more than 400,000 people for safety reasons before the storm struck. 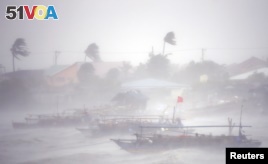 Rough waters from Typhoon Rammasun toss fishing boats off the coast of the Philippines. (July 16, 2014.)

They hoped to avoid what happened last November when Typhoon Haiyan killed 6,300 people.

Falling trees were responsible for most of the deaths in the Philippines. In the city of Lucena, at least three people died when a wall collapsed on them.

Rammasun means "God of Thunder" in the Thai language.

On Thursday, it was considered a category one storm, a measure of storm strength based on wind speed. At the time of this report, Typhoon Rammasun had winds measured at 130 kilometers per hour or more.

A man uses a chain saw to remove a huge tree that fell on top of a car during Typhoon Rammasun. (Manila, July 16, 2014)

Weather experts believe Typhoon Rammasun could gain speed as it moves over the warm water of the South China Sea. The typhoon could then become a category three or even a category four storm.

Xinhua also said on Thursday that shipping will be stopped for an unknown period of time in the strait between Hainan Island and China's southern Guangdong Province.

Damaging winds will also be possible across southern Guangdong and Guangxi Provinces in China late Friday. Northern Vietnam also is expected to have damaging winds Friday night into Saturday.

This story was adapted into Learning English by Anna Matteo based on reports from VOA Central News.