U.S. Foreign-Born Population Rises to Highest in a Century

Update Required To play the media you will need to either update your browser to a recent version or update your Flash plugin.
By Susan Shand
21 September, 2018


In the United States, the number of people who were born overseas rose last year to its highest share in over a century.

The increase raised the number of foreign-born residents to 44.5 million in 2017, up 1.8 percent from a year earlier.

Those numbers come from the U.S. Census Bureau. 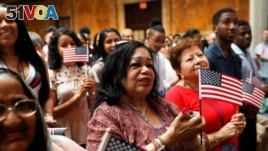 The administration of President Donald Trump has said it wants to restrict legal immigration. It has increased efforts to detain and expel immigrants who entered the country without the government's permission.

Capps studies changes in population at the Migration Policy Institute. He told the Reuters news agency that America's strong job market likely caused part of the increase in the foreign-born population.

That made the percentage of immigrants in the United States last year the highest since 1910, when they made up 14.7 percent of the population.

Stephen Bannon once worked as an adviser to President Trump. Bannon had claimed that 20 percent of the population had immigrated to the United States. He called it the biggest problem for Americans who could not find a job.

The Census Bureau information showed that an increasing number of immigrants were from Asia or had completed higher education.

This continues a trend over the past few years during which immigration from Mexico slowed.

The information comes from the U.S. government's American Community Survey. Experts believe this survey is the best way to estimate the immigrant population. The study is also used to measure population changes in cities and counties around the country. It counts all people born outside the U.S. and does not identify whether they are in the country legally or illegally.

Experts say the survey likely undercounts those living in the country illegally. Illegal immigrants can be more difficult to identify in population counts because of informal housing. Also, some illegal immigrants do not take part in the survey for fear of being reported to the government, experts say.

Jeffrey Passel is a population researcher at Pew Research Center. He estimates that the true immigrant population is likely three percent to five percent higher than the number in the American Community Survey.

census – n. counting of people living in an area to

factor – n. something that helps to produce a result

resident – n. someone who liv