US to Release Emergency Oil Supplies to Ease Prices

Update Required To play the media you will need to either update your browser to a recent version or update your Flash plugin.
By Dan Novak
23 November 2021


The administration of American President Joe Biden said it would release 50 million barrels of oil from the United States emergency oil supply.

It said the move was done in partnership with China, India, South Korea, Japan and Britain to bring down oil prices.

The U.S. Strategic Petroleum Reserve is an emergency supply of oil in case of natural disasters, national security incidents and other events. It is maintained by the Energy Department. It is estimated that there are about 605 million barrels of oil in the reserve.

The release is meant to lower fuel costs and serve as a warning to the Organization of Petroleum Exporting Countries (OPEC). OPEC is a group of 15 mostly Persian Gulf countries. The U.S. and other major oil users believe high prices could slow the global economy's recovery from the pandemic.

The move is also aimed at U.S. voters who are dealing with high inflation and rising gas prices ahead of winter holiday travel. Gasoline prices are, on average, more than 50 percent higher than a year ago, the American Automobile Association said.

Officials said it was the first time that the United States had made such a move with some of the world's largest oil users. The release of the reserves would be a mix of an exchange and a sale to companies that Congress approved, American officials said. 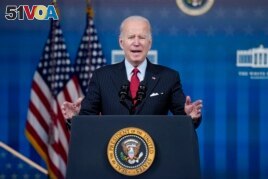 The actions by the U.S. and other nations risk angering some countries, especially Saudi Arabia and Russia. Saudi Arabia and other Gulf countries have made clear that they want to control the oil supply to keep prices high for now. There have been warnings that those countries may back away from promises to increase supplies in coming months.

The Biden administration decision comes after weeks of diplomatic talks. Biden and Chinese President Xi Jinping talked about ways to deal with oil supplies in their online meeting earlier this month. The two "discussed the importance of taking measures to address global energy supplies," the administration said.

The pandemic severely affected energy markets. As business closures began in April, 2020, demand fell. Energy traders did not want to buy large amounts of oil that they could not store. But as the economy recovered, prices jumped to a seven-year high in October.

Experts say releasing reserves may not be enough to prevent continuing price increases.

"It's not large enough to bring down prices in a meaningful way and may even backfire" if OPEC countries slow their supply of oil, Caroline Bain told Reuters. She is an economist at Capital Economics, a research business.

Biden and administration officials said that releasing more oil from the reserve is not in conflict with the president's long-term climate goals. They said the release is a short-term answer to a current problem. Climate policies are a long-term answer over many years, they said.

Dan Novak adapted this story based on reporting by Reuters and The Associated Press. Mario Ritter, Jr. was the editor.

maintain –v. to keep in good condition by making repairs and correcting problems

reserve — n. a supply of something that is stored and kept for a later time

address –v. to give attention to something; to deal with something

backfire — v. to have the opposite result of what was desired or expected