Update Required To play the media you will need to either update your browser to a recent version or update your Flash plugin.
By VOA
23 September, 2014


The United States bombed many Islamic militant positions in Syria for the first time on Tuesday. Officials said the attacks were "very successful" against two leading terrorist groups in the area.

Five Arab countries cooperated with the U.S. to hit Islamic State group and al-Qaida targets, including areas along the northern border. This is where a militant offensive last week caused more than 130,000 Kurds to flee into Turkey.

Separately, the U.S. launched missiles at al-Qaida members in Syria. They form the so-called Khorasan group. President Barack Obama said Khorasan was planning an "imminent" attack on the U.S. 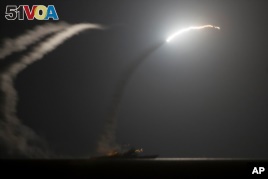 At UN, Calls for Global Effort Against Warming

President Obama and other world leaders are calling for a new international agreement to protect the Earth from dangerous greenhouse gases.

Mr. Obama spoke to delegates at the United Nations Climate Summit Tuesday. He said the United States takes responsibility for its part in damaging the environment. But he said all nations must act together to fight the worsening problem of climate change.

U.N. Secretary-General Ban Ki-moon opened the meeting. He called for the world's nations to find a "new course" to protect the environment from carbon releases.

On Monday, the World Bank announced a new effort for policies that encourage a move to cleaner energy technologies. It said 73 national and 22 local governments, along with about 1,000 companies, are involved in the project.

U.S. researchers say between 500,000 and 1.4 million people in West Africa could be infected with the Ebola virus by January.

The U.S. Centers for Disease Control and Prevention (CDC) released the predictions. They are based on a model that shows cases will double every few weeks in Liberia and Sierra Leone. Officials also believe that the current numbers of cases is higher than those estimated by the World Health Organization.

The CDC said its higher estimate will become "very unlikely" once new efforts to fight Ebola are put in place. This includes an increase in treatment centers and a U.S. promise to send 3,000 troops to the affected area.

Officials are making plans to test experimental Ebola drugs in West Africa for the first time. There is no cure or vaccine for the virus, which has infected more than 5,600 people. More than 2,800 have died. Most of the cases have been in Guinea, Liberia and Sierra Leone.

Words in the News
cooperate – v. to act or work together

responsibility – n. the state of being the person who caused something to happen

model – n. an example; something, usually small, made to show how something will look or work

infect – v. to make sick with something that causes disease