New York City Driver Gets 236 Green Lights in a Row

Update Required To play the media you will need to either update your browser to a recent version or update your Flash plugin.
By Dan Friedell
01 January, 2017

Noah Forman is an Uber driver in New York City.

He is an experienced driver in a city known for its severe traffic jams. 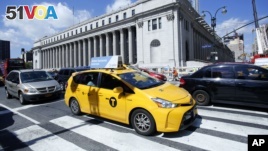 Traffic is usually slow in New York City. But one Uber driver made it through 236 green lights in a row.

Forman started driving a taxi in 2005. Then, he switched to the ride-sharing service.

He said he got the idea to see how many green lights he could make it through without being stopped by a red light, when he saw a video in 2014. One driver made 55 straight green lights.

Forman thought he could get through more intersections than that without stopping.

So one day, he made a video of himself driving and posted it on YouTube.

He got more than 100 lights that time. After reaching a red light, he continued on, and made it through 76 more lights without stopping.

Inspired by his first try, Forman thought he could do even better.

So in early December, he tried again.

This time, he made it through 236 lights in a row.

The drive covered almost all of Manhattan's East Side and took about 27 minutes.

Many people wanted to know how he did it.

A local television station spoke to Forman. He said he drove about 35 kilometers per hour because the lights are timed to reward safe, slower drivers.

He also made the drive early on a Monday morning when there was not much traffic. After over 10 years of driving in New York, he knew which streets would provide long stretches of green lights.

One day, Forman said, he might try to get through 500 green lights.

Most people seemed impressed with his video.

But, there were some who said it was not a big deal. On a website that covers life in New York, one reader wrote: "this isn't impressive, to be honest."

Other readers said the long stretches of green lights are called "the green wave."

Some said the most important thing about Forman's trip was "good luck." Long trips in New York can be influenced by many things, including bad drivers and people walking in the street.

Do you know of other cities with long stretches of green lights? Let us know in the comments section.

intersection – n. the place where two or more streets meet or cross each other

inspire – v. to make someone want to do something, to give someone an idea

impress – v. to cause admiration or interest