Update Required To play the media you will need to either update your browser to a recent version or update your Flash plugin.
By George Grow
09 October, 2014


The 1960s was a time of change in the United States and other places. These changes influenced opinions about social issues, and extended to politics and even science. Internet users can now "hear" this period of history through the YouTube website. Visitors can listen to leading Americans and others who spoke 40 or more years ago at the University of California, Los Angeles. Their recorded speeches were forgotten for years, until recently.

The University of California, Los Angeles, recorded hundreds of people who spoke at UCLA in the 1960s and early 1970s. Some speakers were from the motion picture industry in nearby Hollywood. Others included world leaders and even astronauts.

Tim Groeling is chairman of the university's Communications Department. He says the audio, or sound, recordings are from an important period in history. 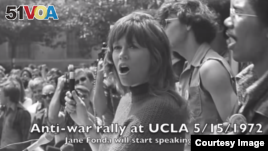 "It's the combination of this being, I think, dramatic figures speaking at what was really a dramatic time. I mean this is a time period where society is really changing."

The recordings were left in storage areas and forgotten until recently, when Tim Groeling discovered an old tape player by chance.

He bought the tape player from the store. Then he asked a former student, Derek Bolin, to help make digital versions of the recordings.

"I felt very good about doing this because I felt like I was preserving a piece of history."

Derek Bolin made digital copies of the speeches recorded between 1962 and 1973. In this 1972 speech, actress Jane Fonda spoke at an anti-Vietnam War protest.

"At a time when there are about 400,000 people in prison in South Vietnam for speaking out for peace, independence and democracy in South Vietnam, I think the least we can do is to close down our schools and universities."

Another recording has the voice of Yitzhak Rabin. He spoke at the university while he was the Israeli ambassador to the United States. He later became prime minister and was murdered in 1995.

In 1968, Rabin spoke to UCLA students about the problems of easing tensions between Israel and Arab nations.

"I'm not very optimistic about the prospects of achieving peace in the near future for two main reasons. I don't believe that Egypt or the ruler of Egypt wants peace, and he has got his own reasons that derives from his ambitions to take over the Middle East, and Israel serves as a barrier between him, between Egypt and the other Arab countries. But more than that, he has found a great support in one of the super powers – in the Soviet Union."

The speeches covered subjects other than world politics. The developer of the polio vaccine, Jonas Salk, gave a speech at UCLA in 1972. He described that period of time as important in the history of science.

"The world is going through very interesting changes now, and changes of such nature that I believe that this is perhaps the most interesting time that man has ever lived. And perhaps it's more interesting than will ever be true again in the future."

Tim Groeling says that without technology and the Internet, it would be difficult for people to hear these men and women. Three hundred sixty-six of the speeches given at UCLA are now available on the YouTube website.

change – n. the act or result of changing; amendment

website – n. a place on the World Wide Web that has information about a person or organization

sound – n. fast-moving waves of energy that affect the ear and result in hearing

student– n. someone who studies