Update Required To play the media you will need to either update your browser to a recent version or update your Flash plugin.
By Susan Shand
13 June, 2019


Uganda's health ministry reported this week the first infections linked to Ebola outbreak in the Democratic Republic of the Congo. The disease began to spread in that country last year. Its discovery in Uganda is a setback for health workers who have tried for months to prevent the virus from crossing the border.

The first case was a five-year-old Congolese boy who was sent to a hospital in a western area near the Congolese border. Ugandan Health Minister Jane Aceng told reporters about the case. The boy has since died.

The Ugandan health ministry also has confirmed the death of the boy's 50-year-old grandmother. The boy's younger brother is also reportedly infected. 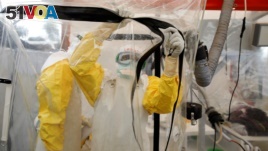 The deaths place pressure on the World Health Organization to declare the Ebola outbreak a worldwide health emergency. The spread of the disease is the second-deadliest ever recorded.

In April, a WHO expert committee decided that the outbreak was not yet an international threat, but that is was of "deep concern." Usually the United Nations agency considers a declaration of a worldwide health emergency when a disease crosses borders.

International health officials have struggled to put measures in place to fight the spread of Ebola and to treat those who are infected. The affected Congolese provinces are suffering armed and ethnic conflict where people are deeply suspicious of outsiders.

Confirmation of the first case of Ebola in Uganda was made Tuesday by the Uganda Virus Institute. A WHO statement said the ministry of health and WHO had sent "a rapid response team to Kasese to identify other people who may be at risk.

In a separate statement, Congo's health ministry said the boy arrived Monday at Congo's Kasindi border crossing. At least 12 family members also appeared to have been infected and were taken to a restricted center at the local hospital for observation.

There have been more than 2,000 confirmed or probable cases of the Ebola virus in Congo since August. Officials have confirmed the death 1,300 people from the disease. It is spread mainly through contact with body fluids of those infected.

For the first time, an experimental, but effective, Ebola vaccine is being widely used. More than 130,000 doses of the vaccine have been given. Uganda has vaccinated almost 4,700 health workers, the WHO said.

Uganda has had several outbreaks of Ebola and similar diseases since the year 2000.

The Associated Press reported this story. Susan Shand adapted it for VOA Learning English. Caty Weaver and Mario Ritter were the editors.

response - n. an answer or reaction to an event