Update Required To play the media you will need to either update your browser to a recent version or update your Flash plugin.
By Christopher Jones-Cruise
01 July, 2017


The huge increase in the number of refugees entering northern Uganda from South Sudan has affected the country's already-weak health care system.

VOA recently visited the Adjumani area in northern Uganda. Health centers there are also near refugee settlements for South Sudanese. But the health centers are unable to care for all of the pregnant women in the area.

Experts estimate that Uganda has one doctor for every 24,000 of its citizens. It has about one nurse for every 11,000 people. Most health care workers are in cities. 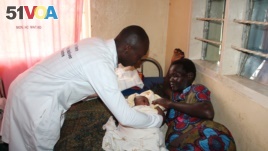 Because of war and violence in neighboring countries, the country now has 1.2 million refugees.

The United Nations says more refugees entered Uganda than any other part of the world in 2016 as civilians fled conflict and hunger in South Sudan. The flow of refugees into Uganda has continued this year.

Ester Ponne Charles is a refugee. She arrived in northern Uganda eight months ago. She also was pregnant.

"If you do not have money, you may lose your life and the child too. Because there they want money. Without money, even medicine, you buy even the gloves yourself, everything in the hospital. So those are the challenges we are facing. Those ones who cannot even afford any coin, so they will just end up losing their life."

Aid agencies and the government have worked to set up temporary health centers in the refugee settlements to help women.

One refugee settlement called Maaji now has 15,000 refugees. However, there are no doctors and only eight medical officers and nurses for the settlement.

Tako Stephen provides medical care at health center three in Maaji. However, there are limits to what medical workers can do for pregnant women at the center.

"We are unable to conduct planned deliveries here because of the setup of the place. The place is very small," he said. "We only conduct emergency deliveries and yet there are very many pregnant mothers here. So they have to walk all the way from here up to Maaji Two for deliveries."

Some of the women are sent to another health center. Odaru Judith is a nursing officer at the center. She says the number of babies born at the center has increased from 29 to 75 a month.

But, there is little space for patients, she says.

"Our general ward is very small," says Judith. "It has only 10 beds, but the number of deliveries we have in a day, the average is five, and when you take the labor room, it is so squeezed and small that it only fits one bed and at times you have three deliveries at a time, so making it very difficult. You will not even have a place where you can squeeze at least a carpet for a mother to deliver."

In January, the government and United Nations agencies promised to spend $1 million for women's health in the refugee camps. But the U.N. Population Fund says the camps will need four times that amount.

conduct – v. to plan and do something

deliveries – n. the act or process of giving birth to a baby

ward – n. a section in a hospital

squeezed – adj. to be small, not having enough room