Update Required To play the media you will need to either update your browser to a recent version or update your Flash plugin.
By Marsha James
13 February, 2015


The Ugandan government has set up a program to send almost 300 health care workers to work in Trinidad and Tobago. Critics say there is already a shortage of medical workers in Uganda. The move will leave many Ugandans without a healthcare provider.

For years, Uganda has suffered from a lack of healthcare workers. Many skilled health workers leave the country in search of jobs, better pay and health care centers with more resources.

The government is now making such departures even more appealing. It plans to send 283 highly skilled Ugandan health workers to Trinidad and Tobago. Twenty radiologists and one neurosurgeon are among the group, leaving Uganda with just nine professionals in those fields. 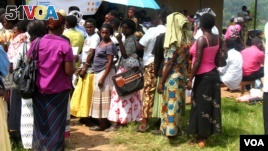 In this 2012 file photo, women wait for family planning counseling outside a health clinic in Uganda. Critics say a government program to send health workers abroad will leave many Ugandans without a healthcare provider. (VOA / Hilary Heuler)

The team will also include 185 pregnancy and birth experts called midwives.

The Ministry of Foreign Affairs is hoping that workers in the program will send money back home for their families. These payments are called remittances. The government taxes them. Ugandan officials say they will use the tax money collected to improve the health care industry.

Uganda has about one doctor for every 25,000 patients and one nurse for every 11,000 patients. The lack of medical workers leads to many preventable deaths. Pregnant women, and those who have just given birth, are among the high risk medical populations. At least 17 women die each day due to problems during labor.

Janet Obuni is president of the Uganda Nurses and Midwives Union. She says it is common for nurses in the country to go unpaid for up to six months at a time. She says this is one reason that work in foreign countries is appealing.

Yet, she says, exporting workers will put many Ugandan patients in danger.
A Ugandan foreign affairs ministry spokesman says the government agencies involved have promised that the program will not endanger the lives of Ugandans. He says the government is supervising the process closely.

However, the Ugandan office of the Institute for Public Policy Research does not accept that assurance. It has taken legal action against the government. The High Court is expected to hold a hearing on the organization's objection March 2.

Lizabeth Paulat reported this story from Kampala, Uganda. Marsha James wrote it for Learning English. Caty Weaver was the editor.

departure - n. the act of leaving a place

labor – n. the process by which a woman gives birth to a baby

endanger – v. to cause (someone or something) to be in a dangerous place or situation