Update Required To play the media you will need to either update your browser to a recent version or update your Flash plugin.
By VOA
25 August, 2014
51VOA听写整理，转载请注明出处。文本已经校对，欢迎纠错！

Edie Mukiibi will work to help people in Africa create gardens and grow healthy food. But he does not have the support of government officials. Many of them believe large agricultural companies are the answer to Africa's food security problems. 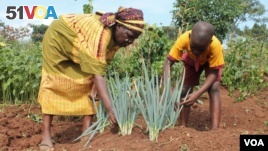 Solomon Walusimbi and his mother harvest a rare variety of leeks in their garden in Mukono, Uganda, July 22, 2014. (Hilary Heuler/VOA)

10-year-old Solomon Walusimbi is working in his garden. It is next to a small wooden house in Mukono near Kampala. He is proud of his work.

"This is my garden. I plant so many things, like peas, carrots and maize," Solomon said.

Solomon also grows cabbage, eggplants and a rare kind of leek. His garden is more colorful than others, because Solomon understands the importance of growing many different kinds of crops.

Edie Mukiibi is working hard to teach that lesson to others in Uganda. Slow Food International wants him to help people create 10,000 gardens like Solomon's throughout Africa. Many of these gardens will be in schools. Mr. Mukiibi says he hopes the garden will teach young people about the importance of slow food.

"You find little children of 3 to 15 years having a lot of knowledge about the traditional crops, the local crops, the planting seasons and such kind of things. This is what we are achieving with the gardens. The gardens project is very important to reconnect young people like Solomon back to the land," Mukiibi said.

Mr. Mukiibi was an agronomy student seven years ago. He learned how to help farmers plant crops. But he discovered the crops being planted were sometimes not right for the farming environment in Uganda. He began to understand how important local foods were to food security. But he says local foods were quickly disappearing.

"These are products which are used to the African conditions, apart from being traditional. When we had a bad season and farmers predicted a bad season, they had a crop for that season. When they predicted an attack of butterflies and insects, they had a potato variety which was resistant to this pest, and everyone was encouraged to plant that. Today, we have no choice," Mukiibi said.

But Mr. Mukiibi is having a hard time persuading political leaders and scientists to support the Slow Food Movement -- they support big farms that can grow large crops and a lot of them.