Update Required To play the media you will need to either update your browser to a recent version or update your Flash plugin.
By Anna Matteo
14 October 2021


Imagine you are preparing to take a flight. As you step onto the plane, you are greeted by a flight attendant.

Now, describe the clothes of the female flight attendant. You might say she is wearing a skirt, dressy top and dress shoes with heels. That would describe her traditional work clothes, or uniform.

But on one airline, that is changing.

SkyUp Airlines is a privately-owned Ukrainian airline. It recently decided to put an end to heels and form-fitting skirts for their female flight attendants.

Now, the women will wear white Nike sneakers. And their uniform will be a loose-fitting suit -- with an orange jacket, orange pants and a white T-shirt. The suit and T-shirt are both made by Ukrainian clothing companies.

The airline made this change after hearing comments from the flight attendants about their uniform. One of them is Alexandrina Denysenko.

Denysenko says that during a flight she sometimes does not sit down – not even for a minute. After standing so much and while wearing high heels, her legs and feet hurt. She said to wear comfortable shoes is like a dream come true.

While she says that heels look beautiful, "... feet suffer and swell by the end of the flight. And, she told Reuters, "...sneakers are absolutely cool." 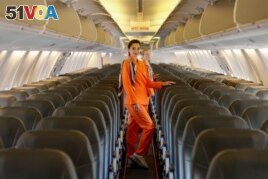 Flight attendants of SkyUp Airlines pose for a picture onboard a plane during the presentation of a new uniform at the Boryspil International Airport outside Kyiv, Ukraine September 30, 2021. (REUTERS/Gleb Garanich)

The company said they researched the history of cabin crew uniforms. They decided to get rid of what they called "conservative" parts of a flight attendant's look. The airline has turned the traditional and conservative uniform into something modern and sporty.

But the changes are not only about style and comfort. There are safety issues to consider as well.

Denysenko said that in the event of an emergency water landing, the crew would have to evacuate the plane on inflatable equipment. Heels can damage that equipment. And she adds "... it won't be very comfortable to swim in a skirt."

The head of the SkyUp Airlines marketing department is Marianna Grygorash. She told Reuters the image of the female flight attendant is very "romanticized." People may think it is an easy job. But in fact, she said, "...their job demands a lot of physical training."

The company also plans to launch a new uniform for male crew. They will wear a light suit and a T-shirt. Their Nike sneakers will be black.

The new uniforms will be officially launched on October 22, 2021.

This story was reported by Margaryta Chornokondratenko and Sergiy Karazy for Reuters News Agency. Anna Matteo adapted it for VOA Learning English. Susan Shand was the editor.

sneakers – n. a sports shoe with a rubber sole

swell – v. to enlarge in an abnormal way usually by pressure from within or by growth

style – n. a method, manner, or quality that is felt to be very respectable, fashionable, or proper

inflatable – adj. possible to fill with air or gas

recycled – adj. to pass again through a series of changes or treatments: such as to process (something, such as liquid body waste, glass, or cans) in order to regain material for human use

romanticize – v. to think about or describe something as being better or more attractive or interesting than it really is : romanticized – adj.