Update Required To play the media you will need to either update your browser to a recent version or update your Flash plugin.
By Susan Shand
28 March, 2019


Ukraine is preparing for presidential elections.

The voting will take place on Sunday. If no one wins a majority of the votes, officials will organize a second vote between the top two candidates. That run-off election would be held two weeks later.

The winner will face great difficulties. Ukraine is struggling to deal with corruption and help energize a weak economy. The country is also at war with rebels in the east. The rebels receive support from Russia's government. 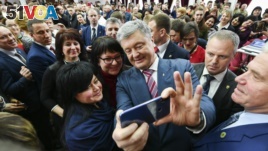 Ukrainian President Petro Poroshenko takes a selfie with students during his visit to the university in Kiev, Ukraine, Monday, March 25, 2019. Presidential vote in Ukraine is to take place on March 31. (Mykola Lazarenko/Presidential Press Service Pool Photo via AP)

Ukrainian voters will find 39 candidates on the ballot Sunday. However, the election appears to be a three-way race between the current president, Petro Poroshenko, the well-known politician Yulia Tymoshenko, and comedian Volodymyr Zelenskiy.

Poroshenko, the incumbent, says he has worked for reforms during his five-year term. He says he has moved Ukraine toward the West and has fought corruption. His supporters say now is not the time to change leaders.

But the Poroshenko campaign been hurt by reports of corruption in military spending. These claims have hurt his hope for re-election.

In the past week, someone new to politics is leading in opinion studies of likely voters: 41-year-old Volodymyr Zelenskiy. During a recent visit to his campaign headquarters, young supporters were busy putting information about him on social media.

"The lack of trust in all the political elites has led to a decision by the Ukrainian people to punish them, and the name of this punishment is Zelenskiy," Razumkov said.

Zelenskiy's television program is called ‘Servant of the People.' On the show, an everyday Ukrainian worker becomes president by chance. So is life about to imitate art?

Zelenskiy's show is on a television station owned by a billionaire who has been accused of corruption. Some think Zelenskiy is under the businessman's control.

But Zelenskiy says he would fight Ukraine's corrupt elite. He says he would end the guaranteed protection from legal action of judges and politicians.

The third leading candidate is Yulia Tymoshenko. She became famous as one of the leaders of Ukraine's Orange Revolution in 2004. Since then, she has been put in jail two times on corruption charges. She denies any wrongdoing.

In her campaign, Tymoshenko has promised to lower fuel prices and to increase payments to retired government workers by 200 percent.

"Her voters are the poorest people of Ukraine," says Volodymyr Fesenko. He works at the Center for Political Studies in Kyiv.

Fesenko adds that the war in the east and threats from Russia are the real issues.

"No matter who becomes president, they can't finish this war by themselves. But they also can't meet (Russian President) Putin's conditions, as the people of this country won't accept it," he said.

Many Ukrainians say they remain undecided over who should be their next leader.

elites – n. the people who have the most wealth and status in a society