Update Required To play the media you will need to either update your browser to a recent version or update your Flash plugin.
By George Grow
17 February, 2015


Ukraine's military and pro-Russian rebels are both refusing to pull back weapons from a town in eastern Ukraine. The two sides have been fighting for control of the area, ignoring an internationally-negotiated ceasefire.

The ceasefire took effect on Sunday. The truce has led to less fighting in eastern Ukraine. But fighting has continued in the town of Debaltseve. Ukraine's military controls Debaltseve, but separatist fighters occupy nearby areas.

Under the terms of the ceasefire, both sides were to begin withdrawing heavy weapons from the town on Tuesday. But each side has said it would not be the first to make such a move.

Cannons of the Ukrainian armed forces are seen at their positions near Debaltseve, eastern Ukraine, Feb. 17, 2015.

A Ukrainian military official said the military will begin to withdraw its heavy weaponry as soon as the militants honor the truce.

A rebel spokesman told Reuters the separatists have what he called the "moral" right to defend the town.

The Ukrainian military spokesman said at least five Ukrainian soldiers have been killed and nine wounded in the fighting, mostly near the town. 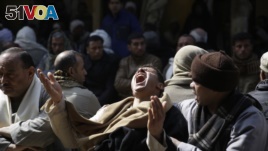 The president of Egypt wants the United Nations Security Council to approve a resolution calling for military intervention in Libya.

President Abdel Fattah el-Sissi made the comment on Tuesday to France's Europe 1 radio. He spoke a day after Egyptian forces carried out airstrikes in the eastern Libyan city of Darna. The airstrikes targeted Islamic State militants. They were meant to answer the Islamic State's execution of 21 Coptic Christians from Egypt.

The executions were the latest example of unrest in Libya since the death of former leader Moammar Gadhafi four years ago. Since then, competing governments and warring militias have been struggling for control of the country.

Afghan officials say a group of suicide bombers attacked a police station in eastern Afghanistan on Tuesday. The attack killed at least 22 officers and wounded 18 others.

One attacker caused an explosion at the entrance to the police station in Pul-i-Alam, about 60 kilometers south of Kabul. A provincial government spokesman reported the attack.

At least one other attacker caused an explosion inside the building, where officers had gathered to eat.

A man claiming to represent the Afghan Taliban said the group carried out the attack.

On Monday, Taliban militants killed at least 13 policemen in the southern Afghan province of Kandahar. 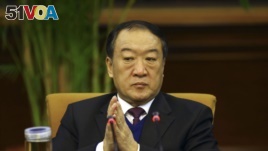 Chinese government lawyers say the government plans to investigate a former top official of China's Communist Party. The announcement comes a day after the party expelled the official, Su Rong, and ousted him from all his government positions. Su Rong was a former party leader in Jiangxi Province. He also served as vice chairman of the Chinese People's Consultative Congress, the country's top political advisory group.

On Monday, Communist Party officials said they found he accepted "huge bribes" in return for approving appointments to government positions.

Chinese President Xi Jinping has launched a campaign against corruption. The campaign has brought down at least 70 Communist Party officials.

This newscast was based on stories from VOA's News Division. George Grow wrote the newscast for VOA Learning English. Kelly Jean Kelly was the editor.

military - n. the armed forces of a nation or group

rebel(s) - n. one who opposes or fights against the government of his or her country

weapon(s) - n. anything used to cause injury or to kill during an attack, fight or war

control – n. the act of controlling; having power over someone or something