Update Required To play the media you will need to either update your browser to a recent version or update your Flash plugin.
By Jill Robbins
13 September 2022


Ukraine's leaders say they want to retake all the territory occupied by Russian forces. Ukrainian officials have called on the West to speed up providing weapons systems to support their offensive.

Russian forces withdrew from areas they held in northeastern Ukraine on Saturday. Ukrainian troops have recaptured many towns. This change in control could be the Russian military's worst defeat since the early days of the war.

Deputy Defense Minister Hanna Malyar told Reuters on Tuesday that fighting continues in the northeastern Kharkiv area. She added that Ukraine's forces were making progress because they are highly motivated and their operation is well planned. 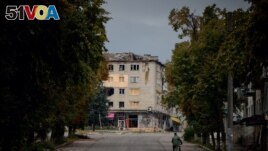 A local resident walks in a street in the town of Izium recently, liberated by the Ukrainian Armed Forces, September 13, 2022.

Malyar said, "The aim is to liberate the Kharkiv region and beyond - all the territories occupied by the Russian Federation."

Western allies have given Ukraine billions of dollars in weapons that, the country says, helped limit gains by Russia. Russian forces are estimated to control about one fifth of the country, mainly in the south and east. But Ukraine is now carrying out an offensive in both areas.

The Ukrainian military reports Russian forces were shelling parts of the retaken Kharkiv area. The Russian troops also are attacking further south in the Donetsk area, which is controlled by separatist groups supported by Russia. Ukraine had resisted the attacks in the Donetsk region, its general staff report said.

Denis Pushilin is head of the separatist group in the Donetsk aera. He said its forces were resisting Ukrainian attacks and he believed the situation would improve.

Ukraine's border guards service showed a video of what it said were Ukrainian troops liberating the town of Vovchansk near the country's border with Russia. They were burning flags and tearing down a poster saying, "We are one with Russia".

U.S. Secretary of State Antony Blinken said on Monday that Ukrainian forces had made "significant progress" with Western support.

Some Russian broadcasters have criticized Russia's leadership over the loss of territory in Ukraine and called for more troops. A Russian government spokesman Dmitry Peskov told reporters that Russians continue to support President Vladimir Putin.

On Monday, Peskov said the military operation would continue until it reached its goals. He did not answer a question about whether Putin still trusts in the abilities of his military leaders.

Ukrainian officials said Russia has answered Ukraine's battlefield successes by shelling power stations and other important structures. This caused a loss of electricity in Kharkiv and some other places. Russia has said Ukraine is responsible for the power outages.

Tom Balmforth reported on this story for Reuters. Jill Robbins adapted it for Learning English.

motivated – adj. having a good reason to achieve or do something

liberate – v. free the people of an area from the political or military control of another country, area, or group of people

significant –adj. large enough to be noticed or to have an effect