Update Required To play the media you will need to either update your browser to a recent version or update your Flash plugin.
By Bryan Lynn
03 January 2023

Ukraine's Minister of Digital Transformation, Mykhailo Fedorov, told The Associated Press the country wants to expand its use of drones in the war against Russia. Russian forces invaded Ukraine in February.

So far, Ukraine has mostly used drones for military observation activities. But Fedorov said the next step is to develop drones with increased battle abilities. "These are both exploding drones and drones that fly up to three to 10 kilometers and hit targets," he said. 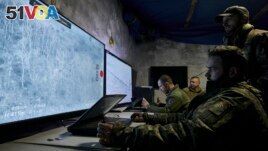 Russian officials have accused Ukraine of launching several drone strikes on military bases in recent weeks. In one attack, Russia said its forces shot down a drone entering the Engels airbase. The airbase sits inside Russia, about 600 kilometers from Ukraine's border.

Russia's military said debris from the Ukrainian drone killed three soldiers but did not damage any aircraft. The base keeps bomber aircraft that Russia has used in attacks against Ukraine.

Ukrainian military officials have not officially admitted to carrying out such drone strikes. Russia has used Iranian-made Shahed drones for its airstrikes in Ukrainian territory in recent weeks. Russia has used drones along with other weapons, including rockets, guided missiles and artillery.

Fedorov told the AP, "I can say already that the situation regarding drones will change drastically in February or March."

At times, Fedorov said, fewer than half of mobile phone towers are operating in the capital, Kyiv. That is because Russian airstrikes have destroyed or damaged equipment that powers them.

Ukraine's government is currently trying to link the country's mobile phone towers to back-up power systems so they can keep operating when airstrikes damage equipment.

The only back-up systems currently available are ones like the Starlink satellite internet service. Starlink is owned and operated by American technology company SpaceX.

Starlink is designed to provide high-speed internet service to rural and under-connected areas of the world. SpaceX chief Elon Musk began providing the service in Ukraine during the early days of the war after Fedorov tweeted a request to Musk.

About 24,000 Starlink stations are already in operation in Ukraine. The country is currently seeking support from its European Union partners to help bring at least 10,000 more stations to Ukraine.

Fedorov compared Space X's donation of the Starlink system to other military equipment supplied by the United States. He noted the satellite internet service has helped the country's military improve its defense abilities against Russian forces. "Thousands of lives were saved," he said.

Fedorov added that his ministry – which was created just three years ago – currently spends about 70 percent of its time on developing military technologies.

drastic – adj. extreme or sever in effect or action

mobile – adj. able to move or be moved easily

tower – n. a very tall, narrow building, or part of a building