Update Required To play the media you will need to either update your browser to a recent version or update your Flash plugin.
By Dan Friedell
13 June 2022


They were not soldiers. But a 15-year-old Ukrainian boy and his father from a village outside of Kyiv won praise for their work to help the military.

In the early days of Russia's invasion of Ukraine, Andriy Pokrasa and his father, Stanislav, used a drone to take photos of a long line of Russian tanks moving to Kyiv.

The father and son then sent the photos and the location of the tanks to Ukraine's army. Within minutes, they told the Associated Press, Ukrainian artillery shells hit and destroyed the invading forces. 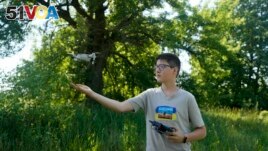 Andriy Pokrasa, 15, lands his drone on his hand during an interview with The Associated Press in Kyiv, Ukraine, Saturday, June 11, 2022. (AP Photo/Natacha Pisarenko)

They said during the week of February 24, they repeatedly sent the drone up to take photos and send information to the Ukrainian military. Stanislav said he knows how to fly the drone, but Andriy is the better pilot. They knew they could have been captured or killed if Russian soldiers found out.

"These were some of the scariest moments of my life," Andriy said.

The Pokrasas did not know how many targets were hit based on their information. But the father said, "There were more than 20 Russian military vehicles destroyed, among them fuel trucks and tanks."

As the battle for control outside of Kyiv increased, Ukrainian soldiers urged the Pokrasa family to leave their village, which Russian troops eventually occupied.

Stanislav, like all adult men under 60, had to stay in Ukraine. Andriy left the country with his mother to finish school in Poland. But now they are back as the fighting is centered in Ukraine's east.

drone– n. a small type of aircraft that can fly without a pilot

contribute– v. to help with something