Update Required To play the media you will need to either update your browser to a recent version or update your Flash plugin.
By Faith Pirlo
25 June 2022

The laws will ban the printing of books by Russians who held Russian citizenship after the collapse of the Soviet Union in 1991. Unless Russians give up their passports, their books will not be printed in Ukraine.

The laws ban businesses from importing books printed in Russia, Belarus, and Russian-controlled Ukrainian territory. They also require special permission to import books in the Russian language from other countries. 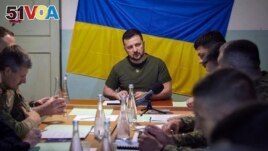 An additional law would ban music by post-1991 Russian citizens in Ukrainian media and in public areas. There would also be quotas to increase the amount of Ukrainian language heard on TV and radio.

Ukraine's Cultural Minister Oleksandr Tkachenko said that he was happy with the new laws. They still have to be signed by President Volodymyr Zelenskyy before they take effect.

The Ukrainian cabinet's website quoted him as saying, "The laws are designed to help Ukrainian authors share quality content with the widest possible audience." He said that Russian creative content would not be accepted in physical form because of the Russian invasion.

Even some Ukrainian lawmakers, who the public considers to be pro-Russia, supported the new laws.

The new rules are part of a movement in Ukraine called "derussification." It is the latest wave in the cultural break from Russia that has been happening since the Soviet period ended in 1991.

Some consider the laws part of a process over the years to remove the legacy of rule by Russia. After the collapse of the USSR, there was "decommunization," or the removal of Communist ideas and culture. Now, "derussification" aims to undo the connection to Russia and policies that hurt Ukrainian identity.

Support for this process increased after the 2014 invasion of Crimea and the separatist movement in eastern Ukraine. But since the February invasion, support for "derussification" has taken on a new meaning.

In Ukraine's capital of Kyiv, hundreds of places are to be renamed to remove the connection to Russia. In April, a monument that celebrated the relationship between the Ukrainian and Russian people from the Soviet period was torn down to cheers from a crowd.

The government in Moscow disagrees with the process. Russian officials say that people who speak Russian in Ukraine, about 30 percent of the population, are being forced to speak Ukrainian and are being oppressed by Ukraine's policies.

quota – n. a specific amount or number that is expected to be reached or permitted

legacy — n. something that comes from someone in the past that affects the present

monument – n. an edifice built by humans to mark an event or memory