Ukraine War May Turn on Which Country Has Best Drones

Update Required To play the media you will need to either update your browser to a recent version or update your Flash plugin.
By Dan Friedell
19 July 2022


Military experts say drones have influenced the war between Russia and Ukraine more than in any other military conflict.

The pilotless aircraft first started to be used in war about 20 years ago. That was when American soldiers first fired on Taliban leaders in Afghanistan.

In the war between Russia and Ukraine, experts say the nation with the strongest drones will likely be in a good position. 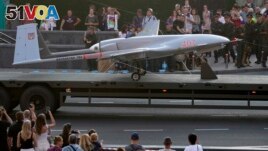 A Turkish-made Bayraktar TB2 drone is displayed during a rehearsal of a military parade dedicated to Independence Day in Kyiv, Ukraine, Aug. 20, 2021. (AP Photo/Efrem Lukatsky, File)

Fighting started in late February. After about five months, the drone fleets on both sides are depleted. As a result, the nations are looking for replacements.

Drones are in demand

Ukraine is looking for supplies from NATO.

A recent report from the administration of American President Joe Biden said Russia is hoping to buy "up to several hundred" drones from Iran. The Iranian drones have gotten past air defense systems supplied by the U.S. Those defenses are currently used by Saudi Arabia and the United Arab Emirates.

Samuel Bendett is with the security research group CNA.

He said Ukrainians are looking for drones that can strike distant Russian forces. He said the Russians want Iranian drones because of their "proven track record."

Both sides are still trying to buy the kinds of drones available to the public then update them for fighting.

Yuri Shchygol is a Ukrainian government spokesperson. He recently called the need for the new drones "immense." He said his country is trying to purchase 200 drones from NATO. But it needs 10 times more than that, he said.

Ukrainian fighters say they do not have enough military drones with technology to prevent Russian interference.

Bendett said the Russians are getting better at defending their drones. Fewer are being shot down compared to the early days of the war. He said the Ukrainians "are on the ropes."

It is unlikely the world will hear more stories of civilian drone operators aiding the war effort. In the early days of fighting, a teenage Ukrainian boy and his father used a drone to find a long line of Russian military vehicles heading toward Kyiv. They sent the information to the Ukrainian military which launched a successful attack.

Now, the Russian military has created a stronger air defense system in eastern Ukraine. That is preventing the Ukrainian military from using Turkish-made drones for bomb attacks. The Turkish drones had been successful early in the war.

Ukraine said it needs drones to fly into Russian-occupied areas to find targets for its Western-made long-range weapons. In June, an adviser to Ukrainian President Volodymyr Zelenskyy said the country has a long list of needs, including 1,000 drones to end the war.

On the other side of the conflict, Russian leaders are also asking for more drones. Yuri Borisov is a Russian deputy prime minister who oversees weapons production. He said more are being made, but "it can't be done instantaneously."

Bendett said although Russia has lost about 50 of its most common drones, it still has many more remaining.

But in the war, nothing lasts long. An earlier story by the Associated Press noted that Spain sent 200 tons of military aid to Ukraine in June. Soldiers said the shipment only included enough ammunition for about two hours of fighting.

A report from the British military research organization RUSI said a Ukrainian drone lasts for about one week before being shot down or made unusable.

The drones are valuable because they can help Ukrainian weapons hit Russian targets. But in order to find the targets, the drone operators have to cross into Russian territory. That is risky.

‘Millions of drones that can't be defeated'

Ukrainian fighters are also using "kamikaze" drones sent from Western nations. They carry warheads that can go through the outer skin of a tank. But those drones can only fly for 40 minutes.

Other drones being sent to Ukraine include Phoenix Ghosts made by Aevex Aerospace in California. The U.S. purchased over 100 for Ukraine in May. Those drones can fly for six hours, can identify targets at night and may be able to hit Russian command posts and armored vehicles.

Another drone, called Furia, is made in Ukraine. They are used to look for targets. They cost about $25,000 each. Only about 30 percent of Ukraine's 200 Furia drones remain from purchases starting in 2014. The chief of Athlon Avia, which makes the Furias, said production is starting again but that more help is needed from outside of the country.

Neither Ukraine, nor the U.S. would comment about the drone needs. Shchygol, however, said Ukraine prefers the "kamikazes" and others capable of getting through Russian defenses.

When drone warfare started over 20 years ago, the technology was so new, most countries did not have good defense systems in place. But over time, that changed. Now, anti-drone systems can identify drones from radio signals and decide the best way to take them down.

At least one expert is concerned about how the technology is progressing.

Thorsten Chmielus leads Aronia, a technology company in Germany that helps make drones. He worries that if the drones have too much success in Ukraine, "everybody will have millions of drones that can't be defeated."

fleet– n. a group of ships or vehicles, such as the ships in a navy or trucks earned by a delivery company

deplete –v. to run out of something, such as a supply of ammunition

on the ropes – phrase. used to describe a person or a thing that is getting tired or close to being defeated

convoy –n. a long line of vehicles traveling close together

kamikaze –adj. used to describe a style of attack popularized by a group of pilots who would crash their airplanes into targets during World War II