Update Required To play the media you will need to either update your browser to a recent version or update your Flash plugin.
By Bryan Lynn
17 December 2022


Mental health experts in Ukraine are using therapy dogs to help children deal with the harmful effects of the country's war with Russia.

The therapy is carried out at the Center for Social and Psychological Rehabilitation. It operates in the city of Boyarka, about 20 kilometers southwest of the capital, Kiev.

The government-run community center is currently helping people who have experienced traumatic experiences during the war. Russia launched an invasion of Ukraine in February. 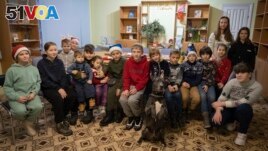 Children traumatized by the war pose for photo with an American Pit Bull Terrier "Bice" in the Center for Social and Psychological Rehabilitation in Boyarka close Kyiv, Ukraine, Wednesday, Dec. 7, 2022. (AP Photo/Vasilisa Stepanenko)

In the past, psychologists at the center have used horses to carry out therapy with individuals. Dog therapy was recently added to the offerings.

A reporter from The Associated Press recently met with a group of children who received dog therapy at the center. The dog who took part was an 8-year-old American pit bull terrier named Bice.

Bice was kept outside a room where about 12 children were seated around a table. The children listened to psychologist Oksana Sliepova. "Who has a dog?" she asked the group. The space quickly filled with shouts of "Me, me, me!"

One young man said his dog was named Stitch. Another child announced he had a total of five dogs. But he said he could not remember all their names. This drew laughter from the group.

As the children waited to meet Bice, the setting looked very similar to a school classroom. But members of this group have personal war stories to tell.

Some witnessed Russian soldiers invading their hometowns and beating family members. Others are the sons, daughters, brothers or sisters of soldiers who are on the front lines or who were killed during the war.

When the time finally came for the youngsters to meet Bice, they could not contain their excitement. The children smiled and their faces lit up when the door opened and the dog ran into the room.

Darina Kokozei is Bice's owner and trainer. She asked the children to come over one by one to say hello. Bice performed several tricks on command. The group then formed a group hug with the therapy animal. For more than 30 minutes, Bice let everybody touch and hug him, without ever barking.

It was the first time Sliepova had worked with a dog as part of her therapy work. She said she had researched the method and learned that working with dog "rehabilitators" can help children reduce anxiety and deal with traumatic experiences.

Sliepova observed how some children were afraid of loud noises, such as a window closing or the sound of an airplane. After hearing noises, some members of the group dropped to the floor or started asking whether a bomb shelter was close by.

Among the children were a brother and sister from Kupyansk, a city in the eastern area of Kharkiv. Sliepova said the children had witnessed Russian soldiers breaking into their home. The troops, armed with machine guns, took hold of their grandfather, then put a bag on his head and beat him.

"Each child is psychologically traumatized in different ways," Sliepova said.

When Bices's owner was asked to identify the best message the dog can give the children, she answered: "Freedom." She added, "Freedom from problems, and happiness."

therapy – n. the work of treating mental or physical sickness

hug – v. to put your arms around someone and hold them tightly

bark – n. the sound a dog makes to express emotions or desires

rehabilitate – n. to help someone live a normal life again after experiencing a serious sickness

anxiety – n. the feeling of being very worried