Update Required To play the media you will need to either update your browser to a recent version or update your Flash plugin.
By Dan Novak
03 October 2022


Ukrainian forces have broken through Russian defenses in the important southern Kherson area. It is Ukraine's biggest gain in the south of the country since the war began.

Ukraine gave no official confirmation of the gains. But a Russian military spokesman admitted that a Ukrainian tank offensive had advanced along the Dnieper River's west bank and recaptured several villages along the way.

Kherson is one of the four areas in Ukraine that Russian President Vladimir Putin annexed last week. They were annexed after a vote controlled by Russia. Western nations call it a false vote conducted at gunpoint. 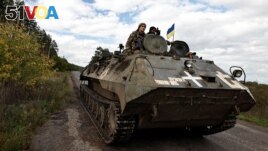 The annexation threatened to push the conflict to a dangerous new level. It also led Ukraine to apply for fast-track NATO membership.

Ukraine has been pushing its counter-offensive in the Kherson area since the summer. The advance in the south came after its troops hit Russian supply lines, cut off larger Russian forces, and forced them to withdraw. It is similar to the military actions that have brought Ukraine major gains in eastern Ukraine.

Ukrainian media on Monday showed an image of Ukrainian troops displaying flags at the village of Khreshchenivka. It is the same area of Kherson where Ukrainian troops have broken through Russian lines.

Oleh Zhdanov is a military expert based in Kyiv. He told Reuters, "The fact we have broken through the front means that ... the Russian army has already lost the ability to attack, and today or tomorrow it could lose the ability to defend."

A Russian-supported official in Kherson, Kirill Stremousov, admitted in a video Monday morning that the Ukrainian forces "have broken through a little deeper." However, he said that "everything is under control" and that Russia's "defense system is working" in the area.

As Russian forces continued to withdraw, its parliament started to approve treaties for four areas of Ukraine to join Russia. However, Russian officials and lawmakers gave conflicting signals on exactly what areas are being annexed.

Ukraine's push to recapture territory in recent weeks has also caused Russians to question and criticize the war.

Tens of thousands of Russian men left Russia after Putin announced a military call-up on September 21. Many have flown to Turkey, one of the few countries that has maintained air connections with Russia. Others have fled in cars, creating a lot of traffic at Russian borders to Finland, Kazakhstan, Georgia, and other places.

Russia's military difficulties have led to a change in state media's presentation. "For a certain period of time, things won't be easy for us. We shouldn't be expecting good news right now," said Vladimir Solovyov, a presenter on state TV.

Ramzan Kadyrov is the leader of Russia's Chechnya territory. He demanded the commander of Russian forces in eastern Ukraine lose his medals and be sent to the front line. Kadyrov also said Russia should use a nuclear weapon.

Putin and other officials have suggested that they could use nuclear weapons to protect Russian territory, including the newly annexed areas. But they have not said they will do so.

annex — v. to add to a country, state, etc.; to take control

track — n. the course along which someone or something moves or proceeds