Update Required To play the media you will need to either update your browser to a recent version or update your Flash plugin.
By Dan Novak
11 May 2022


Ukraine has stopped the flow of Russian natural gas through an entry point that feeds gas to Western Europe.

Ukraine's natural gas pipeline operator said it would stop accepting Russian shipments through a hub in a part of eastern Ukraine starting early Wednesday. The operator said Russian forces were interfering with gas processes and "the stability and safety of the entire Ukrainian gas transportation system."

The hub is in an area controlled by separatist forces supported by Russia. 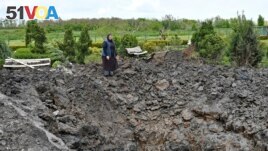 Orthodox Sister Evdokia, looks at a crater left after Russian shelling near Slovyansk, Donetsk region, Ukraine, May 10, 2022. On the same day, the U.S. House of Representatives approved more than $40 billion in aid for Ukraine. (AP Photo/Andriy Andriyenko)

The hub handles about one-third of Russian gas passing to Western Europe through Ukraine. The immediate effect of the cutoff is likely to be limited, said gas expert Zongqiang Luo at business researcher Rystad Energy. Much of the gas can be directed through another pipeline, he said.

However, Russia's state-owned oil company Gazprom suggested the amount of gas flowing to Europe through Ukraine was down 25 percent from the day before.

The cutoff shows how the war is putting gas supplies at risk.

Luo said the cutoff would make it harder for European countries to save gas for next winter. He also said it would quicken "Europe's plans to move away from imports of Russian gas."

The European Union has attempted to reduce its use of Russian energy. The EU is slowly ending its use of coal and considering doing the same for oil. But gas is a more complex problem. Europe uses a lot of gas and it is difficult to find other suppliers.

A pro-Russian official in a southern territory seized by Russian troops said the area will ask Moscow to annex it.

The talk of annexation in Kherson could be another sign of Russia's larger plan for Ukraine. Its invasion has so far not gone to plan.

Kirill Stremousov is a top official with the Kherson regional administration put in place by Russia. He said regional officials want Russian President Vladimir Putin to make Kherson a "proper region" of Russia.

Russian government spokesman Dmitry Peskov said that it would be "up to the residents of the Kherson region" to make such a request.

Through annexation, Russia has been able to gain pieces of former Soviet republics Ukraine and Georgia in recent years. The Soviet Union broke apart in 1991. Russia annexed Crimea in 2014 after holding a vote on the peninsula asking whether it wanted to become part of Russia.

Kherson borders Crimea. It was captured early in the war.

The gas cutoff came as Western powers have been looking to increase economic pressure on Russia and support Ukraine.

Still, there is growing fear that the fighting in Ukraine will be a major problem in Europe and around the world for months or even years.

U.S. and NATO officials have expressed concern that Russia may be preparing for a long conflict. The war is now in its third month with little sign of victory for either side and no likely resolution soon.

hub — n. a central and most active part of a place

stability — n. a state of in which things are not likely to change a lot

annex — v. to add an area to a country or state

region — n. a part of a country or the world that is different or separate from other parts

resident — n. a person who lives in a particular place