Update Required To play the media you will need to either update your browser to a recent version or update your Flash plugin.
By Gregory Stachel
24 July 2022


Nearly 2 million Ukrainian refugees have been sent to Russia, both Ukrainian and Russian officials say.

Ukraine calls the transportation of its people forced transfers to enemy soil, which is considered a war crime. Russia calls the actions humanitarian evacuations of war victims who already speak Russian and are thankful for a new home.

The Associated Press (AP) investigated the stories of several people who were sent to Russia from Ukraine. AP found many refugees are forced to go to Russia. The news agency said they faced human rights abuses and their documents were taken. Many were left confused or lost about where they are. 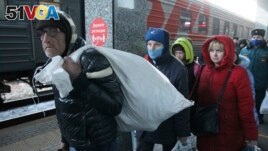 People from Mariupol and eastern Ukraine disembark from a train at the railway station in Nizhny Novgorod, Russia, Thursday, April 7, 2022, to be taken to temporary residences in the region. (AP Photo)

The problems start with, what AP called, a poisoned choice: die in Ukraine or live in Russia. Those who leave go through a series of what are known as filtration points. There, treatment includes questioning and body searches. Officers pull people aside after which they might disappear.

Refugees told AP of an old woman who died in the cold and an evacuee who was beaten so severely that her back was covered in bruises.

Those who go through the filtrations are invited to live in Russia. They are often promised a payment of about $170 that they may or may not get. Sometimes their Ukrainian passports are taken away. The chance of Russian citizenship is offered instead. And sometimes, they are pressured to sign documents denouncing the Ukrainian government and military.

Those with no money or contacts in Russia can only go where they are sent, eastward, even to the very coldest and farthest areas of Russia. Some told AP that they saw many trains arrive over the weeks of the war with more than 1,000 Ukrainians who were sent as far away as Khabarovsk and Vladivostok. Those cities are on the Pacific coast, a 10-day train trip from western Ukraine.

The AP investigation also found signs of dissent within Russia to the government story that Ukrainians are being rescued from extremists.

The AP said the transfer of hundreds of thousands of people from Ukraine is part of a plan, found in Russian government documents.

An "emergency mass order" describes the "distribution" of 100,000 Ukrainians to some of the most distant and poorest areas of Russia. But the Ukrainians were not to be sent to the capital, Moscow.

Ukrainians are technically free to leave Russia. But many stay because they have nowhere to go, no money, no documents, or no way to travel across a country double the size of the United States. Some fear if they return, Ukraine will punish them for going to the enemy. That fear is strengthened by Russian officials.

Others speak Russian with family there and have ties that they feel are stronger even than their ties to Ukraine. One woman told AP that her husband was Russian and she felt more welcome in Russia.

Oleksandra Matviichuk is head of the Center for Civil Liberties in Ukraine. She said it is unclear why Russia is transferring Ukrainians. One goal might be to use the refugees in propaganda tools by pressuring them to speak out against Ukraine.

Matviichuk also said the transfer of local civilians from occupied territories clears the way for Russians to replace them with loyalists. She said this was the case in Crimea. And Russia may want Russian-speaking Ukrainians to populate its farthest areas with poor economies.

Ukrainian refugees in Russia sometimes lose their identities along with their homes.

Tatiana Moskalkova is a human rights activist in Russia. She said only 55,502 have received temporary asylum. The other Ukrainians have unclear legal standing in a country where they are often seen as the enemy.

Along with giving up their official documents, Ukrainian refugees are sometimes pressured to sign papers. The papers say the Ukrainian government or military is responsible for the war.

Tanya Lokshina is the writer of an upcoming Human Rights Watch (HRW) report on forced transfers of people. She said many evacuees do not realize they have the right to refuse to sign documents and the right to leave Russia.

HRW and the Ukrainian Center for Civil Liberties documented several cases where Ukrainians were pressured into signing papers. They include documents that accuse Ukraine's military of war crimes.

Lokshina said, "When you are there and they have the power and you're basically in their hands, you don't know what's going to happen." She added, "So many people sign just because they are afraid."

transfer – v. to move (someone or something) from one place to another

nightmare – n. a very bad or frightening experience or situation

filter – v. to pass (something, such as a gas or liquid) through a filter to remove something unwanted

dissent – n. public disagreement with an official opinion, decision, or set of beliefs

distribution – n. the way that something is divided or spread out