Ukrainians: ‘We Cannot Pause Our Lives'

Update Required To play the media you will need to either update your browser to a recent version or update your Flash plugin.
By Jonathan Evans
02 July 2022


Outside the Ukrainian village of Yahidne are the remains of a small school. The building was partly destroyed in the early weeks of the Russian invasion.

The school's abandoned classrooms are unlikely to hold students again anytime soon. It is just one of the many buildings in Yahidne that have been damaged during the war.

But Yahidne and other villages are slowly rebuilding. Russian troops retreated from the northern Chernihiv area a few months ago. People are repairing homes; the sound of building tools fills the air. 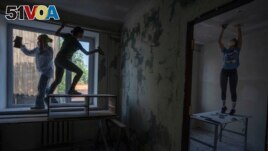 Volunteers from all over Ukraine and other countries are coming to help because there is so much to do before winter begins.

Among the workers are a copywriter and a cameraman who have been repairing the roofs of apartment buildings in front of the school.

The men and 22 other volunteers help the villagers return to their homes as soon as possible.

No one in the village plans to rebuild the school yet. Villagers prefer not to talk about the place at all. That is because Russian forces used the school as a base of operations.

Most of Yahidne's nearly 400 people spent a month in the school's basement, or underground area. They were held captive to be used as human shields to protect against an attack by the Ukrainian army.

Russian troops only rarely permitted the villagers to climb upstairs and go outside. Ten people died in the dark, crowded basement. Survivors blame the lack of fresh air.

Russian troops left the village at the end of March.

The Dobrobat group plans to repair the roofs of 21 houses in the coming weeks. The volunteers include teachers, athletes and programmers. About 80 percent of them have no experience in construction.

A father and son from the Czech Republic decided to spend their yearly family trip in Ukraine this year. Michal and Daniel Kahle see each other for only a few weeks each summer. The son, Daniel, studies in the United States.

"We wanted to do something meaningful instead of just being tourists," he said.

That is how they came to the town of Makariv in the Kyiv area. Many buildings there were destroyed or damaged in the first weeks of the war.

The father and son joined the volunteer movement Building Ukraine Together. Since 2014, the group has helped restore damaged buildings in eastern Ukraine. For several days, Michal, Daniel and young people from different parts of Ukraine worked to rebuild the Makariv fire department.

Tetyana Symkovych is the volunteer group's coordinator in Makariv. She said, "It's a long game. We cannot pause our lives, sit at home and wait for the war to end."

roof – n. the cover of a building

apartment – n. a room or set of rooms rented as a home

captive – adj. taken and held as or as if a prisoner of war

shield – n. something or someone that protects or defends

athlete – n. a person who is trained or skilled in exercises, sports, or games requiring physical strength, agility, or stamina

construction – n. the process, art, or manner of building something

tourist – n. a person who travels for pleasure