UN Study: Government Action a Main Cause of Extremism in Africa

Update Required To play the media you will need to either update your browser to a recent version or update your Flash plugin.
By George Grow
30 September, 2017


Several African leaders recently spoke to the United Nations General Assembly about the growing threat of violent extremism in Africa.

The leaders called on the international community to help better support anti-terror forces across Africa.

They noted the importance of strengthening such forces at a time when the Islamic State, or IS, group has been losing strength and territory in the Middle East. They predicted that many defeated IS fighters will return to their home countries in Africa. 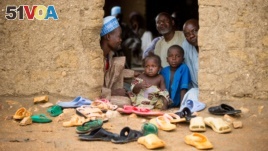 FILE - Refugees sit at the door of their home at the Minawao Refugee Camp in northern Cameroon on April 18, 2016. (AP Photo/Andrew Harnik)

"We want an Africa in peace and security," said Macky Sall, president of Senegal. Sall told the General Assembly last week that the goal is "an Africa that does not serve as a sanctuary for terrorist groups fought and defeated elsewhere."

But a new study has found that measures taken by African governments to prevent terrorism may actually make more people join violent groups.

The United Nations' Development Program, or UNDP, organized the two-year long study. It is called Journey to Extremism.

More than 700 people were questioned for the study. Nearly 600 of them were voluntary or forced recruits of extremist groups in six African countries. The countries are Kenya, Somalia, Nigeria, Sudan, Cameroon and Niger.

The study noted a lack of a strong family structure, lack of education and poverty as reasons why people turn to violence and extremism.

State violence and abuse of power provide, what the study called, a "final tipping point" for the people to join extremist groups.

The report noted that many African countries have used anti-terror measures to limit political opposition and to suppress civil society and the media.

The study suggests that good governance by African governments will be a more effective tool for stopping terrorism and extremism.

Religion not a reason

The U.N. study found that religion was less important than other reasons for joining an extremist group. It said that more than average religious schooling appeared to create opposition to extremism.

The report said, "These findings challenge rising Islamophobic rhetoric that has intensified in response to violent extremism globally."

The report went on to say that creating "greater understanding of religion, through methods that enable students to question and engage critically with teachings, is a key resource for [preventing violent extremism]."

The 2016 Global Terrorism Index suggests that the areas most affected by terrorist groups are the Middle East, North Africa and countries south of the Sahara Desert.

The report identified the most active extremist groups in Africa as Al-Qaida in the Islamic Maghreb (AQIM); the Movement for the Unity and Jihad in West Africa (MUJAO); Boko Haram, in Nigeria; Al-Shabab, in East Africa; and the Lord's Resistance Army, in Central Africa.

Those groups are reportedly spreading their activities across national borders. They are also urging more groups and people to support their ideology and carry out violent attacks.

The U.N. estimates that violent extremism has killed more than 33,000 people in Africa over the past six years

The U.N. has said the terror threat could overturn development gains made in sub-Saharan Africa and harm development for years to come. It said insecurity caused by terror groups has affected tourism and trade in countries such as Nigeria and Kenya.

The threat has persuaded some countries to strengthen their anti-terrorism efforts at home and cooperate on stopping cross-border violence.

Earlier this year, five African countries established an international force of about 5,000 troops with the help of France and the United Nations. The five are Mali, Mauritania, Burkina Faso, Niger and Chad.

Yet, human rights organizations have criticized some governments for using severe measures to fight terrorism.

Amnesty International has accused the Nigerian military of torture, harsh military detention and forcibly expelling people from their homes in its fight against Boko Haram.

And Human Right Watch noted the killing, disappearances, torture and beating of individuals suspected of links with Al-Shabab has worsened in Kenya.

sanctuary – n. a place of refuge or protection

recruit – n. a newcomer to an activity

Islamophobic – adj. relating to a fear or discrimination against Islam or followers of Islam

rhetoric – n. the art of speaking or writing effectively

resource – n. a supply of something; an object or place that proves useful