Update Required To play the media you will need to either update your browser to a recent version or update your Flash plugin.
By Bryan Lynn
28 February 2022


A United Nations report warns that the effects of climate change are likely to intensify unless urgent measures are taken to protect humanity and the planet.

The report was released Monday by the U.N.'s Intergovernmental Panel on Climate Change, IPCC. It deals with the ways nature and the world's societies are currently suffering from human activities linked to climate conditions.

The report states that extreme heat, dry conditions and floods are already threatening the survival of some plants and animals. The IPCC said the changes are appearing much faster and are far more serious and widespread than expected 20 years ago. 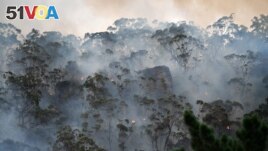 In this file photo, smoke and flames from a "back burn" are shown. The method aims to secure residential areas from encroaching bushfires, at the Spencer area in Central Coast, about 110 kilometers north of Sydney, Australia, on December 9, 2019. (Photo by SAEED KHAN /AFP)

But Guterres said world leaders had failed to take effective steps to limit one of the main causes of climate change – heat-trapping carbon gasses.

Large investments in programs and technology will be needed to limit such pollution, which he said especially harms "the world's most vulnerable" populations. "The facts are undeniable. This abdication of leadership is criminal," Guterres added.

Mohamed Adow is director of the climate policy organization Power Shift Africa. He said in a statement that he considers the U.N. report a serious "wake-up call" to all areas of the world. "The rich, polluting, global north has changed the planet through fossil fuel burning and is now refusing to help those suffering the effects," Adow said.

The report is considered important because the U.N. expects world leaders to use it to form new policies. Its release comes three months after world leaders met at a U.N. climate meeting in Glasgow, Scotland.

The U.N.'s 2015 Paris Agreement aims to contain worldwide warming to within 1.5 degrees Celsius of pre-industrial levels. The U.N. report describes pre-industrial as a time before modern industry and uses a 50-year period ending in 1900 to measure it.

Experts say the world is already 1.1 degrees Celsius warmer than pre-industrial times and heat-trapping carbon gasses continue to increase. Climate experts say this could push temperatures above the U.N.'s target of 1.5 degrees Celsius by the 2030s.

The new report warns that if that limit is crossed, "then many human and natural systems will face additional severe risks... some will be irreversible, even if global warming is reduced."

The IPCC noted that millions of people are already facing severe food and water insecurity. They live in Africa, Asia, Central and South America, and on small islands and in the Arctic.

One of the areas predicted to be the hardest hit by climate change is Africa. Its population is likely to grow faster than any other place during the 21st century, with many people living in coastal areas. The report said that by 2060, more than 190 million Africans will be vulnerable to higher sea levels.

Worldwide, 1 billion people will face coastal flooding risks from rising seas, the report said. And more people will be forced out of their homes from weather disasters. The most likely are flooding, sea level rise and large atmospheric storms called tropical cyclones.

If world temperatures continue to rise, up to 183 million people are estimated to face food insecurity in low-income countries by 2050, the report said.

"Overall, the picture is stark for food systems. No one is left unaffected by climate change," Adelle Thomas told reporters. Thomas was one of the report's lead writers. She is a professor at the University of the Bahamas.

Former U.S. Secretary of State John Kerry is President Joe Biden's Special Envoy for Climate. He called the report "a dire picture" of the effects of climate change "if we continue to ignore science." Kerry said he thinks it is no longer a question of whether the world can avoid a crisis, but "whether we can avoid the worst consequences."

Reuters, The Associated Press and VOA News reported on this story. Bryan Lynn adapted the reports for VOA Learning English.

abdication – n. a decision not to be responsible for something anymore

consequences – n. things produced by a cause or following from a condition