Update Required To play the media you will need to either update your browser to a recent version or update your Flash plugin.
By Christopher Jones-Cruise
07 February, 2016


The United Nations Security Council strongly condemned North Korea's launch of a long-range rocket at an emergency meeting on Sunday.

All 15 council members, including China, approved the statement. The members pledged to quickly adopt a new resolution with "significant" new sanctions against North Korea.

After the meeting, U.S. Ambassador Samantha Power said the resolution must include "unprecedented measures."

China is a permanent member of the UN Security Council. It can stop council resolutions from being approved. China must support any sanctions if they are to be effective, because China gives large amounts of economic aid to North Korea. 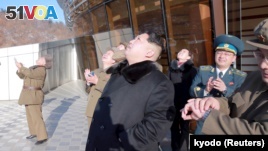 Since 2006, the council has approved increasingly stronger economic restrictions on North Korea for its nuclear weapons and ballistic missiles tests.

North Korea said the rocket was carrying a satellite. It was launched early Sunday morning near the northwestern border with China.

The North said the launch is part of its peaceful space program to send satellites into orbit. But many experts said the space program is being used to hide its tests of nuclear weapons and ballistic missiles systems.

The U.S. Congress is also considering measures to target companies and banks that trade with North Korea. Many of them are in China.

Meanwhile, South Korea and the U.S. announced a plan to begin talks on deploying a missile-defense system.

A joint statement by the militaries of the two countries said they will meet to talk about the possibility of sending the system to South Korea and begin operating it "at the earliest possible date." 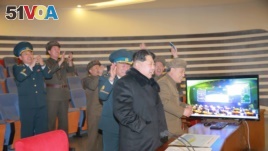 Yoo Jeh-Seung is South Korea's deputy defense minister. He said the system would strengthen "the missile defense of the Korea-U.S. alliance." Yoo said the alliance is considering deploying the system because of the North Korean rocket launch. He said the North has refused to talk about removing nuclear weapons from the peninsula.

He spoke during a meeting with Lieutenant General Thomas Vandal, the commander of the U.S. Eighth Army in South Korea.

The missile defense is known as THAAD. The system is carried on trucks and can fire rockets than can destroy ballistic missiles "inside or outside the atmosphere."

Three years ago, when South Korea talked about deploying it, China said it threatened its security. On Sunday, China again criticized the plan to discuss a possible deployment of the THAAD missile defense system.

A foreign ministry spokesman said China is, in her words, "deeply concerned" that the system may soon operate in South Korea. She said the system would increase tensions on the Korean peninsula and in the area.

VOA's Margaret Besheer at the U.N. and Brian Padden and Youmi Kim in Seoul reported this story. Christopher Jones-Cruise adapted the reports into VOA Learning English. Hai Do was the editor.

We want to hear from you. Write to us in the Comments Section or visit 51VOA.COM.

atmosphere – n. the whole mass of air that surrounds the Earth