Update Required To play the media you will need to either update your browser to a recent version or update your Flash plugin.
By Bryan Lynn
10 January 2023


A United Nations report has found that Earth's protective ozone layer is slowly healing itself.

Ozone is a form of oxygen. In Earth's upper atmosphere, it acts as a barrier to block harmful radiation from the sun. But closer to Earth's surface, ozone is a common pollutant. At ground level, high levels of ozone can harm people's lungs and damage plants.

Research has shown that chemical pollutants released into the atmosphere shrink the ozone layer over time. The layer exists in a part of Earth's atmosphere known as the stratosphere. The layer sits between 15 to 30 kilometers above Earth's surface. Each year, a large hole develops in the layer over Antarctica. 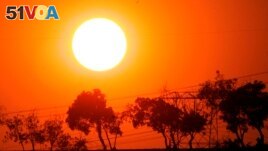 FILE - The sun sets as smoke from a wildfire creates an orange glow in the sky in Diamond Bar, Calif., Sunday, Nov. 16, 2008. (AP Photo/Marcio Jose Sanchez)

In their new report, U.N. scientists say at the current rate, the ozone hole over Antarctica would be fully healed by 2066.

Paul Newman is the co-chair of the U.N. report. It was recently presented at a meeting of the American Meteorological Society. He told The Associated Press, "In the upper stratosphere and in the ozone hole we see things getting better."

However, the researchers reported the healing is happening very slowly. The worldwide average amount of ozone is estimated to return to pre-thinning levels around 2040, the report said.

A 1987 agreement called the Montreal Protocol banned a series of chemicals – mainly used in refrigerants and aerosols – believed to have reduced the thickness of the ozone layer.

The Secretary-General of the World Meteorological Organization, Petteri Taalas, commented about the report in a statement. He said past actions taken to reduce ozone damage had demonstrated the importance of limiting climate-harming substances.

Newman added that while signs of healing were reported four years ago, researchers were looking for more lasting change. The earlier recovery numbers had "solidified a lot," he said.

The two main chemicals that eat away at ozone are in lower levels in the atmosphere, said Newman, who is also the chief Earth scientist at NASA's Goddard Space Flight Center. The report said chlorine levels were down 11.5 percent since they reached a high in 1993. Bromine – which does a better job of eating ozone but exists at lower levels in the air – dropped 14.5 percent since reaching a high point in 1999.

Newman said the reductions in chlorine and bromine levels came largely because of the limits set in the Montreal Protocol.

Another member of the research team was David W. Fahey, director of the U.S. National Oceanic and Atmospheric Administration's chemical sciences lab. He said the latest results show there has been a "sea change" in the way the world deals with its ozone-thinning substances.

Natural weather cycles in the Antarctic also affect ozone hole levels, which are highest in the autumn. The past few years, Newman said, the ozone hole grew a bit bigger because of that. But overall, the results demonstrate clear healing, the report said.

layer – n. an amount of substance covering a surface

refrigerant – n. a chemical substance that can be used to make things or keep things cold

aerosol – n. a substance like hair spray kept in a container under pressure that is released in a fine spray when a button is pushed