UN: Half of Young Teenagers Face Violence or Bullying in School

Update Required To play the media you will need to either update your browser to a recent version or update your Flash plugin.
By Bryan Lynn
18 September, 2018


A United Nations report says about half of students aged 13 to 15 worldwide have experienced some form of violence in school.

This number represents about 150 million students from around the world. The report was released by the U.N. children's agency, known as UNICEF.

"For millions of students around the world, the school environment is not a safe space to study and grow," the report said. "It is a danger zone where they learn in fear."

Some information in the study was collected by UNICEF. Information on some countries came from governments or other organizations.

The report identifies bullying as one of the biggest problems facing schools. About one in three students reported they had experienced bullying at school. In industrialized nations, 17 million students aged 13 through 19 admitted to bullying others at school.

UNICEF said certain youth groups are more likely to be victims of bullying. These include ethnic minorities, children with disabilities and members of the LGBT community. In Britain, one study found that 30 to 50 percent of young school students who identified as gay had experienced bullying. 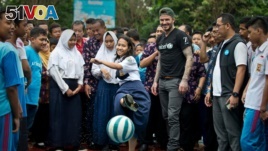 The report said studies have shown that boys are generally more likely to experience bullying that includes physical violence or threats. Girls are more likely to be victims of "psychological or relational" forms of bullying. This can involve spreading false information about people or shutting them out of social groups, the report said.

Cyberbullying is also an increasing problem for students, UNICEF said. This form of bulling is described as "willful and repeated harm" caused through the use of computers, mobile phones and other electronic devices.

Cyberbullying can result in victims developing alcohol and drug problems or having difficulties with schoolwork. In severe cases it can result in suicide, the report said.

The study found about one-third of students aged 13 to 15 reported being involved in physical fights. Data from 25 countries showed that 20 percent of girls and 50 percent of boys reported physical attacks by other students at least once during the past year.

The report said that violence can also happen as a form of punishment in some schools. In some classrooms, teachers and other school officials are "far too often the source of fearful learning environments."

UNICEF said about half of all school-age children live in countries where corporal punishment is not fully banned by law in schools. The organization estimates there are about 720 million children who are not protected from this form of violence.

Armed conflict is another form of violence. The report estimates that about 158 million young people live in conflict-affected areas. For these students, classrooms can be no safer than the communities they live in.

The U.N. said it identified more than 500 direct attacks in 2017 on schools in some countries. Among them, nearly 400 happened in the Democratic Republic of the Congo. In South Sudan, 26 attacks were identified, while 67 were reported in the Syrian Arab Republic. At least 20 school attacks happened in Yemen. UNICEF said many of these attacks were deadly.

The report said school shootings have also become a major form of violence in many areas. Between November 1991 and May 2018, 70 school shootings were reported in 14 countries. Each shooting involved two or more victims, with at least one death.

In addition to the harmful physical and mental effects of violence in schools, the problem can also have great economic costs. The report estimates the worldwide costs of violence against children are as high as $7 trillion.

UNICEF is calling on governments to develop and enforce laws and policies aimed at keeping students safe in schools, as well as in their online experiences.

The organization has also launched an internet campaign, called #ENDviolence, in an effort to raise awareness and increase public support for the fight against violence and bullying in schools.

bully – v. to threaten or attempt to frighten someone viewed as weaker

corporal punishment – n. physical punishment, especially of children, usually by hitting with the hand or a stick

online – adj. connected to a system of computers, especially the internet