Update Required To play the media you will need to either update your browser to a recent version or update your Flash plugin.
By Mario Ritter Jr.
06 December 2021


The World Health Organization (WHO) says measures to fight the Delta variant of the COVID-19 virus should remain the basis for controlling the pandemic. But, the officials also said recent orders of travel restrictions by some countries may help slow the spread of Omicron, a newer version of the virus.

Many countries around the world have reported Omicron infections. 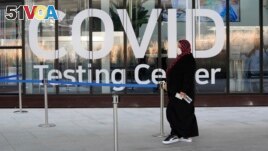 A traveler arrives to enter into a COVID-19 testing center at the Incheon International Airport In Incheon, South Korea, Wednesday, Dec. 1, 2021. √

Small numbers of cases have been reported outside of South Africa, where Omicron was first identified. Now, South Africa is facing a big increase in COVID-19 cases. The new variant is responsible for most new cases there.

Omicron infections have since appeared in more than 35 countries.

However, much remains unclear about the variant. It is unclear if it is more infectious. It also is not known whether it makes people sicker, or whether vaccines are less effective against it.

Dr. Takeshi Kasai is the WHO director for the Western Pacific area. He told reporters last Friday: "Border control can delay the virus coming in and buy time."

Kasai added that every country must prepare for an increase in cases.

However, Kasai said there was good news too. "None of the information we have currently about omicron suggests we need to change the directions of our response," he said.

He added that health systems must make sure beds in intensive care areas of hospitals are available to meet increased need.

Officials in several southern African countries have denounced restrictions on travelers from the area. They say they are being punished for officially reporting the new variant.

Scientists are trying to learn more about Omicron. The WHO had already identified it as a variant of concern. Kasai said that is because of the number of its mutations and because early information suggests it may be more infectious than other variants.

A few countries in the Western Pacific were facing surges that began before Omicron was identified. But COVID-19 cases and deaths in many others have decreased or remained unchanged, Kasai said.

That could change. Among the places that have found the variant are Australia, Hong Kong, Japan, South Korea, Singapore and Malaysia. It is likely to appear in more places.

Omicron is of particular concern for organizers of the Beijing Winter Olympics, which start on February 4. A spokesperson for the organizing committee told reporters that China is putting in place a new series of measures to reduce the risk of virus spread during the Games.

Chinese officials say they have put in place a zero-tolerance policy. The country has some of the world's most severe border controls. Those taking part in the Games, as workers or competitors, will have to stay inside a restricted area for the entire period they are involved. Only vaccinated people who live in China will be permitted to attend the two-week-long sports event.

Around the world, cases have been increasing for about seven weeks and the number of deaths has started to rise again, too. The increase is mainly from the Delta variant and decreased use of protective measures, Kasai said.

Kasai warned especially about the possibility of surges because of more gatherings and movements of people during the holiday season. The northern winter season will also likely bring infectious lung diseases, such as the flu, along with COVID-19.

Kasai said the pandemic is far from over. "But my message today is that we can adapt...to better cope with the future surges and reduce their health, social and economic impacts," he said.

Jim Gomez reported this story for the Associated Press. Mario Ritter Jr. adapted it for VOA Learning English. Caty Weaver was the editor.

response –n. something that is done as a reaction to something else

mutation –n. a change in the genes of a plant or animal that causes physical characteristics that are different from what is normal

zero-tolerance –n. a policy of giving the most severe punishment possible to every person who commits a crime or breaks a rule

adapt –v. to change your behavior so that it is easier to live in a particular place or situation

cope –v. to deal with problems and difficult situations and try to come up with solutions