Update Required To play the media you will need to either update your browser to a recent version or update your Flash plugin.
By Hai Do
01 September 2022


A team of United Nations experts arrived at Ukraine's Zaporizhzhia nuclear power center on Thursday. But their arrival was delayed for several hours because of shelling nearby.

The visit from the International Atomic Energy Agency (IAEA) came after months of negotiations to get inside Europe's biggest nuclear plant.

The nuclear plant is controlled by Russian forces but operated by Ukrainian workers. Russia and Ukraine have blamed each other for repeated shelling near the plant. This has raised fears of a nuclear disaster like the one at Chernobyl in 1986. 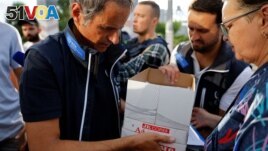 Reuters reported that the 14-member IAEA team arrived in a large group of vehicles with a heavy presence of Russian soldiers nearby. The inspectors were led by IAEA director Rafael Grossi.

"There has been increased military activity, including this morning until very recently," Grossi told the Associated Press on the way to Zaporizhzhia. He added that the group decided to keep moving although risks remained.

Energoatom, Ukraine's state nuclear power company, said Russian shelling had led to the shutdown of one of its reactors. The company said shelling had damaged a backup power supply line used for local needs.

Russian Foreign Minister Sergey Lavrov said Russia expects "impartiality" from the team. "We are taking all the necessary measures to ensure that the plant is secure, that it functions safely and that the mission accomplishes all of its plans there," he said.

The Zaporizhzhia plant has been occupied by Russian forces since the early days of the six-month-long war. Ukrainian officials said Russia has been storing weapons at the plant and using it to attack surrounding areas. But Russia accused Ukraine of firing on the area.

Fighting in early March caused a fire at a training center. In recent days, the plant was temporarily disconnected from power lines because of damage, raising fears of a radiation leak or a reactor meltdown. Officials have begun giving anti-radiation iodine medicine to local people.

Grossi said, "we are going to start immediately an assessment of the security and the safety situation at the plant." He added, "I am going to consider the possibility of establishing a continued presence of the IAEA at the plant."

IAEA spokesperson Michael Amdi Madsen said earlier in the week that the team would investigate the working conditions at the plant. Experts have expressed concern that Ukrainian operators are overworked and suffering from severe tension from the occupation of the plant by Russian forces.

Ahead of the visit, Russia's Defense Ministry reported that Ukrainian forces shelled the area and tried to capture the plant on the Dnieper River. It said that Ukrainian troops arrived in seven speedboats but that Russian forces "took steps to destroy the enemy," using warplanes. Russia said some of the Ukrainian shells landed 400 meters from the plant's No. 1 reactor.

Ukrainian officials accused Russian forces of shelling the town of Enerhodar and a pathway that the IAEA team was to use.

Hai Do adapted this story for VOA Learning English from Associated Press and Reuters reports.

plant –n. an industrial building such as a factory

impartiality –adv. treating all groups and people the same

function –n. the job or purpose of something

assessment –n. the act of making a judgement about something